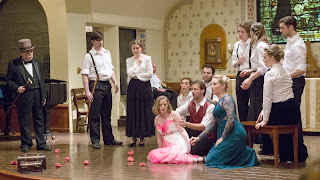 
The version was first used by The Little Orchestra Society in a 2003 Lincoln Center concert reading. Then Light Opera of New York (LOONY) staged it very well indeed in 2012, albeit with smaller forces. Though Mott’s blocking of the action on the current occasion (the 100th anniversary of the show, as it happens) was much the same as at LOONY, Emily Cornelius’ choreography has now added superb vigor and vitality to the whole enterprise.


Though I’m not generally a fan of radical rewrites -- and I refer here to the libretto, not the music or lyrics which Mott has left intact -- her restructuring of the narrative for a smaller cast registers as tightly dramatic and musically satisfying across the board.


The time is 1798. Young Eileen (Joanie Brittingham) has just returned from a convent in France to the estate of her attractive widowed aunt, Lady Maude (Tanya Roberts) in County Sligo where Eileen’s suitor Barry O’Day (Tom Carle)-- son of a noted Irish rebel known as The O’Day --   is about to join the French forces in throwing off the yoke of the British and helping the Irish factions reclaim their rightful lands. Maude, though English, is a sympathizer to the cause and helps steer the British Colonel Lester (Richard Holmes) off the scent. O’Day takes the disguise of Maude’s valet, but his disguise is threatened by his putative friend, the treacherous Sean Regan (Jovani McCleary). There’s been a little flirtation between Barry and Maude, but once Eileen arrives, his ardor for the niece is rekindled. And Maude soon finds herself wooed by both Lester and the pompous Sir Reginald (David Seatter) who has an eye as much for her land as the lady itself.


So goes Mott’s libretto which dispenses with many of the characters, and simplifies the plot to its advantage.


The handsome cast proved dramatically believable and sang beautifully. On the dramatic side, Colonel Lester’s wooing of Maude, for instance, was quite touching in Holmes’ and Roberts’ capable hands.


Mott went back to Herbert and Blossom’s original inspiration, the novel “Rory O’Moore” written by Herbert’s grandfather Samuel Lover, and restructured the plot of “Eileen” along more potent dramatic lines. This necessitated radically altering the original song order -- and a couple of numbers were reassigned to other characters, and at least one (“I’d Love to be a Lady”) was dropped. But the alterations work beautifully.


All the rapturous Eileen/Barry O’Day numbers were satisfyingly done by Brittingham and Carle, culminating in the meltingly beautiful “Thine Alone.” They both employed believable Irish accents, as did those playing the other Irish characters in the show,


Holmes and Roberts performed their teasing “Life Is But A Game” duet with its piquant counterpoint charmingly, and Roberts scored with her soaring “When Love Awakes” (originally Eileen’s song) and later with “True Sons of Erin.”  Roberts also served as narrator at a couple of points. Seatter put across the comic “If Eve Had Left the Apple On The Bough” like a seasoned vaudevillian.


The ensemble numbers such as the “Irish Round” were the men’s “Free Trade and a Misty Moon” were very satisfying, thanks, in large part, to Cornelius’ lively choreography. McCleary gave a lusty rendition of the latter with vigorous male accompaniment. 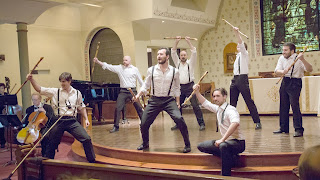 Haley Marie Vick sang “Too Re Loo Re,” normally sung by Eileen; and tenor Christopher Robin Sapp won especially warm applause for his sweetly vocalized “She’s Sweet as Any Flower.”


The narrative includes considerable action particularly in the second act, and I must say there was genuine dramatic tension. As a result, this production felt much more like a full-fledged performance than simply a staged reading.


Adding immeasurably to the impact of this performance was the addition for the first time at VHRP of a six-piece ensemble  (violin, cello, string bass, flute/piccolo, percussion and piano) which played not an arrangement but a reduction of the original orchestration, as Mott took pains to point out at the start of the second act. VHRP Music Director Michael Thomas -- who had conducted the LOONY performance with the same size forces -- led the freshly formed New Victor Herbert Orchestra from the overture onward with flair in the dramatic moments and most feelingly in the lyrical ones.


Hopefully, VHRP’s expanded resources will carry over to next season’s offerings of “The Enchantress,” “The Red Mill,” and a concert of selections from Herbert shows concerning American abroad.

Print this post
Posted by Harry Forbes at 11:56 AM