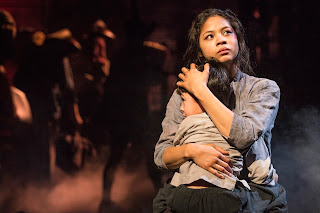 
This is a most impressive revival of the Claude-Michel Schönberg/Alain Boublil musical hit of (can it really be so?) 28 years ago which, while not quite erasing memories of the exquisite Lea Salonga and superb Jonathan Pryce, confirms the show’s quality and durability. Fresh from its London run (and there’s already a DVD in the U.K., including an elaborate special finale of a gala performance where Salonga and Pryce intermingled with the present cast members).


The original London production took place 1989, and the show came to Broadway two years later to the very same theater where it has now taken up residence. Back in 1991, as many recall, there was much controversy over the casting of Pryce as a Eurasian, not a problem with the present casting.


The show -- “Madame Butterfly” updated and transposed to Vietnam War-era Saigon and Bangkok -- is, as one can freshly appreciate, cannily constructed and, in its way, packing as much of an emotional wallop as Puccini’s opera. There are many superb theatrical moments such as “The Morning of the Dragon” sequence dramatizing the third anniversary of reunification in Saigon (renamed Ho Chi Minh City) and the heart-stopping first act finale with Kim, her child, and the Engineer fleeing Vietnam as the curtain falls.  The exciting evacuation of Saigon with its iconic helicopter liftoff is shrewdly held till the second act as a flashback as is the show’s most flamboyant production number, “The American Dream” (now with a brief cynical Trump allusion that is entirely apt).


One is aware in these well-populated numbers that there has been no stinting on cast members.
And Cameron Mackintosh’s care in the classy mounting of this property (as with the recent “Les Miz”) is exemplary.


Faithful to Nicholas Hytner’s  original staging in many respects (rather more so than the turntable-less recent comeback of “Les Miserables”), Laurence Connor’s new production -- with evocative sets by Totie Driver and Matt Kinley, lighting by Bruno Poet, and costumes by Andreane Neofitou -- provides just enough of a facelift to give the show a fresh feel. Bob Avian recreates his musical staging and choreography.

As for the iconic helicopter sequence, alas, technology failed at my performance, and we were only given a projection which, I gather, normally works in tandem with the three-dimensional prop, but it was still an exciting sequence.


Eva Noblezada makes a fine Kim, convincingly innocent but passionate in the love scenes with her American soldier Chris (Alistair Brammer) and appropriately fervent in her devotion to him and the son she bears. (And I would swear there seems to be more smooching between Kim and Chris during their duets, but they manage to do so adeptly while maintaining the vocal line!)


Jon Jon Briones’s Engineer, the pimp character with whom she develops an unlikely but synergistic bond, is quite different than Pryce’s creation but just as dynamic, and as sly and sleazy as you would wish for the role.


Brammer looks good and acts well, though his high-lying singing seemed a bit tremulous at my performance. Other cast standouts included Devin Ilaw as Kim’s villainous fiancee Thuy, Katie Rose Clarke as Chris’ concerned but empathetic American wife, and Nicholas Christopher as Chris’ buddy John who sings the still rather mawkish  “Bui Doi” at the opening of Act Two.


But, that number aside, the score -- under the musical direction of James Moore -- holds up mighty well and songs like “The Movie in My Mind,” “I Still Believe,” “The Last Night of the World,” “If You Want to Die in Bed,” “Why God Why” are effective as ever. I did miss Ellen’s original “Now That I’ve Seen Her” ballad, replaced by “Maybe.”


Even if Schönberg and Boublil’s subsequent mega-musicals, “Martin Guerre” (never on Broadway) and “The Pirate Queen” (only Broadway) failed to have the same success despite respective virtues, these two men will always stand tall in the musical theater pantheon with their two mega-hits.


Production credits, including Totie Driver and Matt Kinley’s production design (replacing John Napier’s original), Andreane Neofitou’s costumes, are all fine, though I did find Mick Potter’s sound balance a tad muddy, whereas I can remember with almost photographic aural recall how brilliantly clear the first production was in 1991.