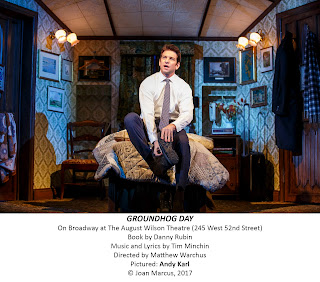 
Andy Karl returned to the musical that recently won him London’s Olivier Award, and apart from the visible leg brace during those moments his leg was exposed, his exuberant performance and physicality seem undiminished as far as I could see.


Karl was extremely impressive in the “Rocky” musical, and showed his considerable comic chops in “On the Twentieth Century,” and his Phil Collins character here is different than both. Besides his strong musical skills he’s a fine, nuanced actor.


The production started at London’s Old Vic where it ran for 10 weeks with a different supporting cast.


Based on the 1993 Bill Murray film, with a book by the movie’s co-scriptwriter Danny Rubin, it tells the tale of a cynical Pittsburgh weatherman assigned to cover the titular day in Punxsutawney, Pennsylvania, where he gets stuck in a time warp with the dreaded day repeating over and over again, which slowly (rather too slowly) brings out his humanity, and teaches him to value the good things in life and find love in the process. As with “It’s a Wonderful Life” and “A Christmas Carol,” he ultimately learns how to smell the roses.


Karl’s rapid fire repetition of scene after relived scene is impressive, and though he goes through the first act with his Phil Connors character fairly arrogant and unlikable, he wins us over in the second act as he works his way towards redemption.


Barrett Doss as the associate producer assigned to work on the story with him is warmly sympathetic with a lovely voice to match.


Karl and Doss dominate, but the rest of the cast are all fine, including Rebecca Faulkenberry as the town sexpot with whom Phil has a brief fling, and she’s been given  a touching second act opener (“Playing Nancy”). And John Sanders as Phil’s nerdy former schoolmate with a good second act solo (“Night Will Come”). The rest are good, but the script reduces most everyone to caricature.


Partly due to the repetitive nature of the story, the first act feels rather protracted, and I do think the show would benefit from just a bit of trimming.


Tim Minchin’s score is in a more traditional Broadway vein than the one he wrote for “Matilda - The Musical” and it mixes genres (the country-flavored “Nobody Cares,” the rhythmic “Punxsutawney Rock”) deftly, and there are several nice ballads (“Seeing You,” “Philosopher,” “If I Had My Time Again”), but it’s hard to assess a score on first hearing. But his lyrics are quirkily clever.


Choreographer Peter Darling and set and costume designer Rob Howell are also talented “Matilda” alums, and the latter’s abstract set design (though on the chintzy side) and Andrzej Goulding’s video design provides the necessary fluidity for this time looping narrative.


Matthew Warchus, who helmed “Matilda,” directs with ingenuity as when, for instance, we see Phil waking up repeatedly in his little bedroom during the song “Hope,” when seemingly just observed elsewhere on the stage.