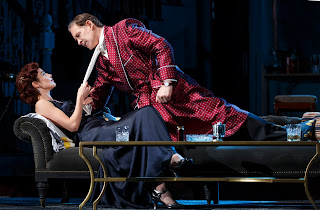 Noel Coward’s 1939 comedy (not produced till 1942)  about a vain, self-absorbed  larger-than-life actor has served as a meaty Broadway vehicle for the likes of George C. Scott, Frank Langella, and Victor Garber over the past three decades.

I first encountered the play in 1980s London with the peerless Donald Sinden in absolutely superb comedic form. I remember sitting next to the great star Elizabeth Welch - a contemporary of Coward -- who was helplessly convulsed with tears of laughter were running down her face. That production was filmed, and is available in the BBC’s “Noel Coward Collection” box. There’s also an excellent abridged black and white version with Peter Wyngarde on the U.K. only “Choice of Coward” collection.

The role was created Coward himself, and later on Broadway by Clifton Webb, though Coward played it again in the 1950s in the States.

The part of Garry Essendine calls for a hammy, extravagant performance, and Kevin Kline delivers those attributes, along with his still impressive physical comedy prowess, with considerable aplomb. With an authentic English accent and plenty of bravado, the role suits him like a glove, and he ranks high in the pantheon of great actors who have played the part.

But he’s not acting in a vacuum. The rest of the ensemble cast is top quality: Kate Burton as ex-wife Liz; Kristine Nielsen as his devoted secretary of many years; Peter Francis James as his friend and producer Henry; Reg Rogers as manager Morris who’s having a clandestine affair with Henry’s wife..

Moritz Von Stuelpnagel draws excellent performances from all, and maintains a good pace --- balancing the farcical and naturalistic components -- so that one is only sporadically aware of the play’s talkiness. If, on the whole, the show doesn't quite rise to the giddy heights of that Sinden production, Kline's bravura turn is definitely one to catch.

Cobie Smulders and Kevin Kline in a scene from Broadway's PRESENT LAUGHTER (photo by Joan Marcus) Print this post
Posted by Harry Forbes at 2:33 PM