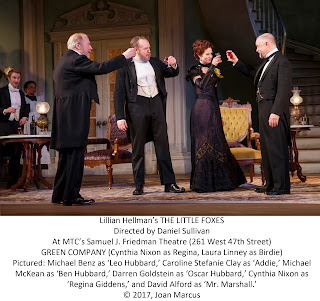 
This latest revival of Lillian Hellman’s most revered play is solid through and through, and looking back, the best stage version of my experience. In 1981, it was rather thrilling to see Elizabeth Taylor in the flesh as the conniving Regina Giddens, and she had her good moments, but I recall she kept losing energy throughout the evening.

The 1997 Lincoln Center revival with Taylor-lookalike Stockard Channing was much better. But I didn’t much care for Ivo van Hove’s idiosyncratic staging at New York Theatre Workshop or a 2001 Donmar Warehouse revival with a game but miscast Penelope Wilton.


This one seems to me perfectly cast across the board with the drama absorbingly unfolding over three acts under Daniel Sullivan’s assured direction on Scott Pask’s handsome set, with sensitive lighting by Justin Townsend.


One has the choice of seeing Laura Linney as Regina and Cynthia Nixon as Birdie -- each nicely bedecked, like the rest of the cast, in Jane Greenwood’s turn of the last century costumes -- or vice versa. I had the former teaming at my performance, and both ladies were splendid in their roles.

I hadn’t found Laura Linney too convincing as the villainess La Marquise de Merteuil in the Roundabout's “Les Liaisons Dangereuses” a few seasons back, but she’s spot-on perfect here. So, too, Nixon is wonderfully sympathetic and heart-breaking as the alcoholic Birdie. And her big third act monologue, delivered while getting more and more inebriated, is masterfully done. 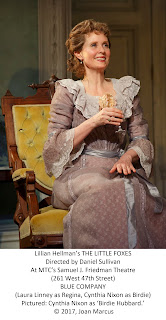 But colleagues who have seen the parts reversed were just as impressed.


The other players are equally accomplished: Francesca Carpanini as their daughter Alexandra; Darren Goldstein and Michael McKean as Regina’s avaricious brothers; and Michael Benz as Oscar and Birdie’s weak crooked son Leo. Caroline Stefanie Clay and Charles Turner are very fine as the servants of the Southern household.


Richard Thomas plays Regina’s dying husband Horace with plenty of spirit and, at one point, rages magnificently at his grasping wife.


One admires anew the well-crafted structure of Hellman’s play, melodramatic though it can be, and, even knowing full well how it will end, one hangs on every word.