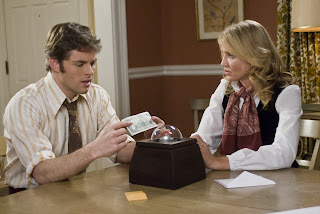 “The Box” is a frustrating film in that it starts so promisingly with a good visual look, compelling paranoiac mood, and intriguing premise.

It’s 1976, and the place Richmond, Virginia. The titular object is dropped off in the early morning hours at the front door of the Norma (Cameron Diaz) and Arthur (James Marsden) Lewis on Christmas morning. The family is asleep, but Norma wearily trundles down the stairs, opens the door and takes the box in. It contains a strange looking object: a red button under a glass dome. There’s a note from one Arlington Steward, stating that he’ll come to call at 5 p.m. that day.

Arthur’s a NASA engineer. Norma’s a high school English teacher who teaches her class Sartre. She also walks with a limp. Her injury is the result of medical malpractice. A smirking student asks her if they can see her foot, and she dutifully removes her stockings.

At the appointed hour, Steward shows up. It’s Frank Langella with a terrible burn on his face, having been struck by lightning. He explains that he holds the key to the object delivered that morning. If she uses it to open the dome, and push the button, someone they don’t know will die. But they will be rewarded with one million in cash.

She and Arthur are in a quandary. He’s just been denied promotion to astronaut; she’s been told that their son’s (Sam Oz Stone) tuition will not be covered by her school any longer. And she’s hoping to have reconstructive surgery on her foot. In other words, they need money. “It’s just a box,” she reasons with Arthur. Well, of course, she pushes the button, an irreversible action she and Arthur will regret.

From this point on, the plot – adapted from Richard Matheson’s short story “Button, Button,” and already adapted for a “Twilight Zone” episode in the 1980’s – gets more and more puzzling, even as the moral implications of the story become obvious: our living in a push-button society, our responsibility to our family and the world at large, the consequences of our actions, and so forth.

But even accepting the conventions of the genre, serious suspension of disbelief is called for. Without being overly literal, why would someone open their door in the middle of the night and bring in a bomb-like box? Why would Norma meekly show her injured foot to an insolent student? Why would she allow the mysterious Steward into her home, even when he’s played by Langella at his most suavely urbane? Why are so many of their friends and neighbors acting mysteriously creepy? Why all the nosebleeds? Why are Norma and Arthur not surprised when they’re chased by silent mobs through the long corridors of a library? Why don’t they ever ask each other what’s going on?

It’s a credit to Richard Kelly’s direction that you want to go with the flow, and accept logic-defying points. But as Kelly’s script, intelligent in many ways, is so complicated that you really can’t figure out motivation, you begin to lose interest. Everyone in the town acts creepy from the get-go, it’s hard to feel a sense of growing menace.

Diaz gives a nice, low-keyed performance with a slight Southern accent, and looks lovely. Marsden does good work as the husband.

Many of the effects are striking, most especially a bit of supernatural transporting involving a large body of water (I’ll say no more), and the handsome sets and entire physical production look expensive.

It’s never exactly dull, but it’s not consistently gripping either. There’s way too much business about NASA that never really pays off, except to underscore that in that year of the Mars Viking Mission, extra-terrestrial forces might be at work.

The ambiguity of some of the plot elements and overall premise will be intriguing to some, puzzling or even preposterous to others, especially as portentous themes of salvation and damnation come to the fore. Much as I admire the lead performances and Kelly’s attempt to really say something important here, I’m afraid I lean towards the latter.

(Rated PG-13 by the MPAA for thematic elements, some violence and disturbing images.) Print this post
Posted by Harry Forbes at 8:48 AM