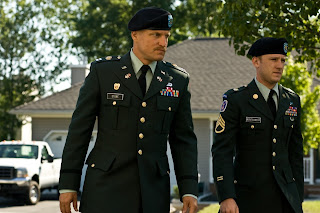 Let it be said right at the start that you won’t see three finer performances than those delivered by Ben Foster, Woody Harrelson, and Samantha Morton in Oren Moverman’s superb and heart-wrenching “The Messenger.”

Foster plays Iraq war vet Staff Sergeant Will Montgomery who has come back from service with honors, but in his remaining months of service is given the grim task of joining Captain Tony Stone (Harrelson) in breaking the news of war casualties – killed, missing, or captured -- to family members. Still emotionally fragile from his war experience, he must join the tough-talking, seemingly stoic senior official on the grim mission.

The rules are rigid. Speak only to family members. If no one’s home, leave. Don’t park near the house, as neighbors will guess the truth. No touching of the next of kin.

Eventually, the men become friends, and beneath his bravado, hard-drinking and womanizing, Stone reveals he’s as vulnerable as Montgomery.

Morton plays young mother Olivia Pitterson to whom they deliver the news while she’s hanging a man’s clothes in the backyard. (They assume she’s already taken up with someone new.) She disarms them by showing empathy for their grim task. “I know this can’t be easy for you,” she says empathetically.

We’ve already observed several instances of the two men doing their sad duty, each tougher than the last. A mother and common-law wife are hysterical. A distraught father (played beautifully by Steve Buscemi) becomes physically and mentally abusive.

Heedless of the injunction about becoming emotionally involved, Montgomery falls for Olivia, and returns later to help her with chores. Their relationship remains platonic, despite mutual yearning.

Perhaps the most extraordinary scene in the film is a lengthy kitchen episode where Montgomery takes Olivia home, ostensibly to consummate their feelings, and she simply cannot bring herself to take that step. The lengthy sequence was filmed in one take, their playing almost unbearably poignant.

Throughout the film, Foster, Harrelson, and Morton inhabit their characters so truthfully, you never get a sense of “acting.”

Israeli-born Moverman, who also co-wrote the script with Alessandro Camon, must be credited for the veracity of those performances and of the film as a whole.

Foster made a striking impression as Claire’s boyfriend in “Six Feet Under,” and later stole “3:10 to Yuma” from Russell Crowe and Christian Bale, but this part should really put him on the map for his sensitive portrayal. Harrelson, who has admirably managed his post-“Cheers” career with varied roles and integrity, is the essence of a dyed-in-the-wool military man, masterfully conveying the inner hurt.

There’s a commendable anti-war subtext throughout, while still remaining patriotic. At one point, Stone opines that all funerals should be shown on TV to drive home the reality of war. Olivia berates the army recruiters in a shopping mall aggressively targeting a young man.

The subject matter may be downbeat, but the film’s artistry and terrific performances make it a completely absorbing and uplifting experience. It is one of the very best films of the year.

(Rated R by the MPAA for language and some sexual content/nudity.) Print this post
Posted by Harry Forbes at 8:37 AM