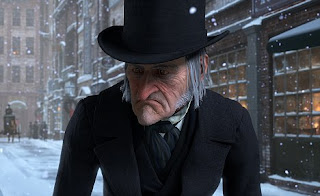 Those who regard Alastair Sim’s “A Christmas Carol” (originally “Scrooge” in the U.K.) as the greatest version of Charles Dickens’ 1843 novella – and doesn’t everyone? – may have to relinquish at least partial pride of place to this new version from Robert Zemeckis starring Jim Carrey (yes, Jim Carrey) as the old skinflint.

Mind you, the version under discussion here is animated, and it utilizes the performance capture technique well remembered from Zemeckis’ “The Polar Express,” the animated characters often resembling the actors voicing them, but as with that Tom Hanks film, the results are strikingly realistic. So we can allow the Sim version its standing as the best live version.

What is especially pleasurable about this latest version is the script’s fidelity to the Charles Dickens’ 1843 text. Zemeckis wrote the screenplay and he’s used the animation techniques to craft a superbly visual experience, while keeping the basic story grounded in reality.

Despite the Disney label and the use of animation, the story has not been sweetened in the slightest. This is as dark and frightening a version as has been done. The Christmas present sequence, for instance, ends on a disturbing note as the Ghost – his jollity visibly draining -- reveals two feral children – Ignorance and Want – under his cloak. And The Ghost of Christmas Yet to Come sequence ends bleakly with Scrooge pulled down to a waiting coffin. But though there were plenty of children at a recent press screening, I don’t think any of them had to be carried screaming from the auditorium,

Carrey plays the early scenes of Scrooge as uncompromisingly as anyone, with a harshness to match his exaggeratedly sharp nose and pointed chin.

Zemeckis has made the story admirably fresh. These may well be the images one remembers ever after: Scrooge quivering in front of his fireplace before his visitations, Marley’s heavy chains and cashboxes, young Scrooge weeping in his lonely classroom, the Cratchits’ meager Christmas gathering, and so on. It seems there is less of Tiny Tim, but that is in keeping with the Zemeckis’ overall ramping down the cuteness.

The voice work is extraordinary. Carrey plays Scrooge at all ages as well as the ghosts of Christmas Past (a child like figure with a candle-like head aflame) and Present, a laughing Falstaffian giant. (The Ghost of Christmas Yet to Come is a silent specter).

But Gary Oldham is equally impressive, voicing not only Bob Cratchit but Tiny Tim and Marley’s Ghost. Robin Wright Penn is Scrooge’s fiancée Belle who breaks off the engagement when she observes him making an idol of money, as well his young sister Fan who dies young. Colin Firth is his unflappable nephew Fred. Cary Elwes is the fiddler at jolly Fezziwig’s big bash; Dick Wilkins, Scrooge’s office mate; and a businessman rebuffed by Scrooge when he’s soliciting contributions to the poor.

Zemeckis departs from realism for several flights of animated fancy, such as Mrs. Fezziwig spinning around like an airborne whirling dervish during a ball scene. And Scrooge flying through the air as the Ghosts take him on their journeys. There’s a too long chase sequence involving a black coach and two eerie black steeds.

“A Christmas Carol” is being shown in IMAX and 3D, and I must say this is one of the most effective uses of 3D I’ve ever seen. Without being hokey, the process makes the brilliant recreations of 19th Century London come satisfyingly to life.

Zemeckis and crew have done gloriously right by Dickens.

(The film has been rated PG by the MPAA Ratings Board for scary sequences and images.) Print this post
Posted by Harry Forbes at 7:01 AM