The Men Who Stare at Goats (Overture Films) 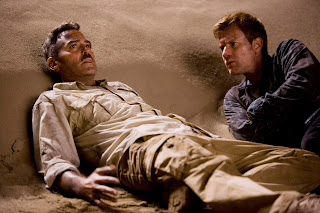 If the film had nothing else, its above-the-title stars – Ewan McGregor, George Clooney, Jeff Bridges, and Kevin Spacey, among them – would make the film worth seeing.

But, especially for those who enjoy the wacky military shenanigans of, say, “Catch-22” or “Dr. Strangelove,” this is a quirky and quite amusing satire. It is based on the rather incredible revelations that in the 60s, 70s and 80s, the U.S. Army had experimented with paranormal methods such as mind reading, predicting the future, teleporting, and becoming invisible.

It’s 2003, and McGregor (with a good American accent) plays Ann Arbor, MI, reporter Bob Wilton; Despondent over the infidelity of his wife and breakup of his marriage, he heads to the Mideast to reclaim his manhood.

In Kuwait, he runs into army man Lyn Cassady (Clooney) whom, coincidentally, he had once, while covering a story, heard was involved in incredible military research to replace conventional warfare with myriad psychic methods instead.

Bob convinces Lyn to take him along on his mission to Iraq where they have a series of adventures, including crashing their vehicle, being captured by an Al Qaeda-like terrorist group, and getting lost in the desert.

Along the way, Lyn tells Bob his back-story as a legendary Special Forces figure in the top-secret unit of “warrior monks.” And of the program’s founder Bill Django (Bridges), a Vietnam vet, who brought all kinds of New Age methodology into this unit: healing, martial arts, ESP, and so on. “Be all you can be” was their motto. All of this is related in entertaining flashbacks.

Lyn himself did have extraordinary powers. He could discern an item in a closed file drawer, predict the future, and even kill hamsters and goats by simply staring at them.

“More of this is true than you would believe” impishly declares one of the film’s opening titles. Though the characters in it are fictitious, Peter Straughan’s script was adapted from Jon Ronson’s non-fiction book of the same name which told the history of the actual First Earth Battalion, inspiration for the film’s “New Earth Army,” self-proclaimed Jedi Warriors. Lyn is apparently an amalgam of several characters in the book.

Anyhow, Lyn and Bob eventually find the aging Django in a training camp run by Lyn’s nemesis, renegade psychic Larry Hooper (Spacey), who had always been jealous of Lyn’s extra-sensory prowess. He had testified against him after a debacle in Django’s unit, once even bestowing on Lyn the dread “death touch” (a tap on the shoulder). He now commands a personal militia of “super soldiers.”

This is essentially a combination buddy-road flick, and Clooney and McGregor play beautifully off each other. McGregor, who narrates, is the very appealing straight man, Clooney the very funny sidekick, confirming – as he did in “Burn After Reading” – what a good comedian he can be. Lyn’s actually a sensitive soul, though clearly not playing with a full deck. But Clooney and McGregor also manage to create real people, both damaged – in different ways -- by their pasts.

It's directed by Clooney’s “Good Night and Good Luck” co-writer/producer Grant Heslov with the sort of sensibility you might expect from the Coen Brothers.

(Rated R by the MPAA for language, some drug content and brief nudity.) Print this post
Posted by Harry Forbes at 9:10 AM