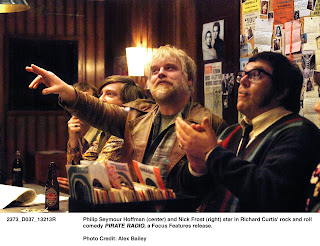 This paean to 1960s rock and roll -- originally titled “The Boat That Rocked” when released in a longer version in Britain earlier this year -- is a frenetic, cheerfully vulgar romp, populated by the wild and crazy crew of a renegade boat transmitting rock and roll music to Britain, when the monopolizing BBC was limiting its playing of such music to only a couple of hours each day.

Conflict is supplied by a humorless government minister, here named Dormandy (Kenneth Branagh), determined to shut it down. In reality, the adversary of the pirate radio stations was a Labour party politician named Tony Benn. Jack Davenport plays Dormandy’s unfortunately named assistant Twatt, under strict orders to find a legal loophole to end the boat’s transmissions.

Vessels like the actual Radio Caroline – anchored beyond the U.K.’s official territorial waters – filled that gap left by the Beeb, building huge audiences. Some youngsters would surreptitiously listen to their transistor radios underneath their pillows, like the little boy in one of the film’s early scenes.

Richard Curtis -- writer of “Notting Hill,” “Four Weddings and a Funeral,” “Love Actually,” and director of the last named -- has assembled a colorfully eclectic cast to play the disparate characters: Bill Nighy as Quentin, the ship’s urbane, permissive captain; Philip Seymour Hoffman and Rhys Ifans as the ship’s principal star sparring deejays; Nick Frost as tubby Lothario Dave; Chris O’Dowd as lovelorn Simon who’s enamored of fickle Elenore (January Jones as a 60’s bird quite different from her role on “Mad Men”); and with Tom Brooke, Rhys Darby, Ralph Brown and Ike Hamilton as the other colorful on-air personalities. Amidst this all-male environment, there’s Katherine Parkinson as lesbian cook Felicity

Quentin’s teenaged godson Carl (Tom Sturridge) is sent by his mother (Emma Thompson) to stay on the Radio Rock boat after he is expelled from school for smoking (tobacco and pot), and amid the anarchic atmosphere of sex, weed, and alcohol onboard, comes of age, and maybe even finds the father he never knew. He falls for the pretty Marianne (Talulah Riley), brought on board by the thoughtful Quentin, to help the lad lose his virginity. (Matters don’t go quite as planned, however.)

The camaraderie of the ship’s crew is fitfully endearing but there’s not so much a strong narrative as a series of wacky vignettes, some amusing, others less so, and there are dullish stretches. The cast is beyond reproach, though, and indeed, the deejay characters look as if they’ve been spinning discs all their lives.

When, towards the end, the ship springs a leak and the movie morphs into a mini-“Poseidon Adventure,” you find yourself more involved.

Curtis – who also wrote the script – claims inspiration from both “M*A*S*H” and “National Lampoon’s Animal House,” and that gives you the idea: the informality of the former, the raunchiness of the latter.

In the end, it’s the soundtrack -- one long wallow in 60’s rock (the Rolling Stones, Jimi Hendrix, The Who, etc.) -- that leaves the most vivid impression rather than most of the ho-hum shenanigans on board.

(Rated R by the MPAA for language, and some sexual content including brief nudity.) Print this post
Posted by Harry Forbes at 7:04 AM