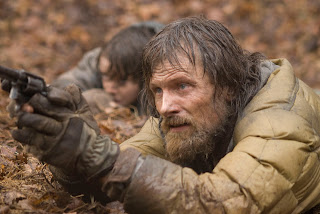 Along their bleak way to the hoped-for warmth of the coast, the father teaches the boy what he must do to stay alive, as they encounter a road gang, some barely living creatures who are fodder for the cannibalism which is rife in this mostly dead planet, a feeble Old Man (Robert Duvall, and a Thief (Michael Kenneth Williams) who steals their belongings while the boy is sleeping, and the father is off foraging for food.

The father occasionally gives way to his baser nature – for example, not sharing food with The Old Man and harshly punishing The Thief -- but his son keeps reminding him that they have to be the “good guys,” and that they must continue to “carry the fire,” as it were, despite being bereft of everything they once had.

The allegorical Pulitzer Prize-winning novel was adapted by Joe Penhall, and directed by John Hillcoat. Those who have read the book may, in fact, better appreciate the movie which is so unrelentingly grim and difficult to sit through, though it is not without suspense.

Mortensen gives the fine, bravely committed performance we’ve come to expect of him, and he’s well matched by the extraordinary Kodi Smit-McPhee. Charlize Theron – who really must try to find some lighter parts – is briefly observed in flashback and the wife and mother who left them shortly after the great cataclysm, presumably to commit suicide, when she just can’t take it anymore.

Guy Pearce, who appeared in Hillcoat’s acclaimed 2006 film “The Proposition,” shows up as The Veteran late in the film, a sequence which offers a glimmer of home for the future.

All in all, this is a vivid depiction of human endurance and the love of a parent for a child, but will clearly not be for all audiences.

(Rated R by the MPAA for some violence, disturbing images and language.) Print this post
Posted by Harry Forbes at 10:10 AM