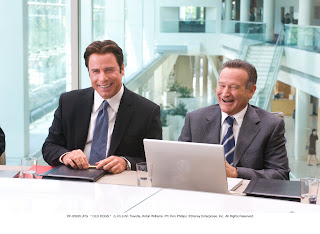 Robin Williams and John Travolta make a surprisingly effective comedy team – Williams more or less playing sensitive straight man to Travolta’s extroverted playboy – and the movie has heart, albeit a saccharine one.

But otherwise, “Old Dogs” is hampered by a formulaic (and how!) plot, and some of the most witless, wince-inducing slapstick you can imagine.

Dan (Williams) had rashly leaped into marriage seven years earlier to Vicki (Kelly Preston), right after divorcing his first wife. The second union – which lasted only one night -- was quickly annulled.

Now Dan – feeling the emptiness of his life -- has decided to send her a sentimental seven-page letter suggesting a reunion, When she agrees to see him, he’s all set to rekindle the brief romance he’s come to regret losing.

But Vicki has a surprise for him. It seems their one night of passion produced twins, and now she's off to serve a two-week jail sentence for trespassing during as part of a protest demonstration (talk about contrived!).

After some further plot contrivance, she ends up asking Dan to watch the kids, Zach (Conner Rayburn) and Emily (Travolta and Preston’s real-life daughter, Ella Bleu Travolta). Dan takes up the challenge, and convinces best friend Charlie (Travolta) to share baby-sitting duties. They’re both sports marketers anxiously trying to secure an account with a Japanese firm, and wouldn't you know, the deal is at its most critical stage within this same two week period.

The kids at one point mix up Dan and Charlie’s pills in the medicine cabinet, resulting in aberrant behavior such as Charlie upsetting a bereavement gathering to which he’s invited by Japanese translator Amanda (Lori Loughlin), and Dan having some mishaps on the golf course with his Japanese would-be clients slamming the balls into their, shall we say, sensitive areas.

When the film turns sentimental (which is reasonably often), it is somewhat affecting, despite the clichés. A scene with Dan and his daughter – him role-playing a king, she a princess – manages to be touching, thanks to Williams’ nicely low-keyed work. In fact, taken strictly on its own terms (and that’s no small feat), Williams actually delivers one of his best performances. We’ve seen him do the sad-sack shtick before, but he’s particularly good here.

Travolta has the requisite light touch for comedy, and give or take a few pounds, looks more his old self than in other roles of late. Unfortunately, David Diamond & David Weissman’s script is singularly uninspired, with character motivation never convincing. Dan being trapped in a tanning machine because Charlie’s chatting up the vapid attendant who chooses to ignore Dan’s screams for help is the first of many annoyingly illogical moments.

Besides a game Ann-Margret (still the glamorous figure of old) in the bereavement sequence, other cameo roles are taken by the late Bernie Mac as a puppeteer, Matt Dillon as a hard-nosed scout leader, Rita Wilson, Justin Long, and Amy Sedaris. Seth Green plays Dan and Charlie’s doofus assistant Craig who nearly botches the Japanese deal.

We’ll give director Walt Becker points for his handling of his cast, but his blocking of the slapstick is downright clunky.

If you’re the sort of parent that doesn’t mind some rather crude – occasionally violent – slapstick (try a car trunk door slamming down on a woman’s hand), and a borderline yucky scene is Dan taking his (till then, fatherless) son to a public men’s for the boy’s first time, and standing with him in the stall, as the boy inquires about the facts of life, the shenanigans – such as Dan, Charlie, and Craig finding themselves inside a zoo gorilla enclosure -- may satisfy the most undemanding kids.

(Rated PG by the MPAA for some mild rude humor.) Print this post
Posted by Harry Forbes at 7:10 AM