“Precious: Based On The Novel ‘Push’ By Sapphire” (Lionsgate) 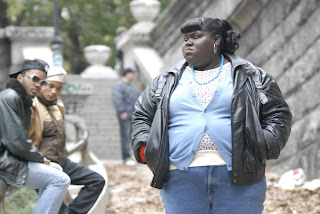 Claireece “Precious” Jones, an overweight 16-year-old African-American girl (played by 24-year-old Gabourey Sidibe) is the unlikely heroine of this extremely gritty but ultimately uplifting film. She lives with her indolent and abusive mother Mary (Mo’Nique in a role most assuredly not played for laughs) in Harlem.

Geoffrey Fletcher wrote the screenplay based on former teacher-turned-poet Sapphire’s first novel “Push,” which was published in 1996. Set in 1987, Precious has been repeatedly raped by her father, and has already borne one child, afflicted with Down Syndrome, and has another on the way.

Through the intercession of a math teacher at school, she’s transferred to an alternative literacy school, Each One Teach One, where she comes under the pre-GED tutelage of Ms. Rain (Paula Patton), who we come to learn is a lesbian, and finds another ally in a kindly welfare worker (an excellent, no-nonsense Mariah Carey).

Narrated by Precious, who at the narrative’s start, is functionally illiterate, the bleak story is periodically relieved by brief fantasy sequences where we get a glimpse of the better life the girl imagines for herself: dancing at the Apollo, modeling, attending a red carpet event. At one point, she projects herself and her mother into (of all things) Sophia Loren’s “Two Women,” which is running on television while she and Mary are eating dinner.

But there are also several deeply disturbing sequences involving her mother’s physical (and even sexual) abuse, the most horrific sequence occurring after Precious returns from the hospital after giving birth to her second child.

But what makes the story special is despite all that happens to Precious (and believe me, there’s more nasty business than what I’ve outlined above), she holds out hope for the future.

The film, as directed by Lee Daniels, avoids overt sentimentality. Even the tough girls at Each One Teach One are a hard-boiled bunch, and don’t all go gooey and maudlin when Precious goes through some hard times, but you feel their concern.

The performances are all top notch. Sidibe plays the part to a tee, impassive on the surface, but even when we’re not hearing her first-person narration, allowing us to somehow intuit her thoughts, and conveying a strong inner resilience. Mo’Nique fearlessly limns the manipulative, unsympathetic mother, while Patton, Carey, and Lenny Kravitz as a sympathetic male nurse who comes to care for Precious, unshowy work too.

Both Sidibe and Mo’Nique have moments of emotional catharsis, the former in the classroom when she finally reveals her self-loathing, and Mo’Nique when she opens up to the welfare worker about her daughter’s sexual abuse and the raging depth of her jealousy, a brilliant monologue that may just win her nominations, come awards time.

Despite the film’s admirable qualities, and the endorsement of Oprah Winfrey and Tyler Perry (who enthusiastically came on board after seeing the film as executive producers), this will most assuredly not be everyone’s cup of tea. The language is strong, and the grim thematic material (at times way over the top) is obviously rough, but those who choose to see it, may find this 2009 Sundance Film Festival winner a redemptive and moving tale about learning to love yourself.

(Rated R by the MPAA for child abuse including sexual assault, and pervasive language.) Print this post
Posted by Harry Forbes at 7:27 AM