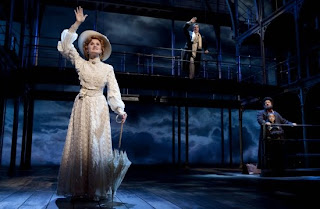 Any doubts that a mere decade might have been too soon to bring back this epic musical adaptation of E.L. Doctorow’s colorful novel are dispelled within moments of this tremendous revival.

And what a brilliant, moving work is the piece itself. Its juxtaposition of the emerging sounds of the syncopated rhythms at the turn of the last century (the “New Music” described in one of the show’s stirring numbers) with the sweeping sociological changes and world-shaking historical events of the period is a masterful conceit.

On Derek McLane’s striking three-tiered set, there’s little sense of skimping, despite advance reports that this would be a pared-down version. This feels every inch the spectacle.

Though the central characters – with their archetypal names such as Mother and Father – suggest caricature, they register as three-dimensional characters, even if the historical figures – Harry Houdini (Jonathan Hammond), Evelyn Nesbitt (Savannah Wise), Henry Ford (Aaron Galligan-Stierle) among them – are lightly sketched. The overall effect is moving indeed.

The book charts the fortunes of a 1902 New Rochelle WASP family (Mother, Father, Younger Brother, and The Boy); Harlem ragtime pianist Coalhouse and servant girl Sarah who bears his child; and Tateh, a Jewish immigrant and his daughter. To summarize briefly: Mother rescues Sarah and the abandoned baby, taking them in, while her husband is away, Coalhouse woos Sarah back, and Tateh endures countless hardships as a peddler on the Lower East Side until, incredibly, he finds fortune in the fledgling movie business. When tragedy befalls Sarah, Coalhouse becomes a hardened militant demanding justice at any cost, with a surprising ally in Younger Brother.

Along with the economy and potency of McNally’s book, one can’t too highly praise the effectiveness of the score. Flaherty’s music alternates between ragtime, period pastiche, and powerful ballads and choral numbers, while Ahrens lyrics intelligently encapsulate the wide-ranging emotions of the sprawling narrative. And though the show is rife with heavy-duty themes like bigotry, class differential, worker exploitation, and the like, pedantry is avoided.

I had remembered Coalhouse and Sarah’s “The Wheels of a Dream,” Mother’s “Back to Before” and Coalhouse’s “Make Them Hear You” as high points of the score (as indeed they are).

But this time around, I was struck by the power and beauty of others like “Journey On,” a duet for Father and Tateh, one journeying out to sea with Admiral Robert Peary on his expedition to the North Pole, and Tateh just approaching America on a ship of immigrants; and “Our Children," Mother and Tateh’s duet ruefully sung as they watch their respective son and daughter play together at the shore in Atlantic City. This is one of the great American musical theater scores, and it’s lovingly conducted here by James Moore.

The original cast was superb, and put Brian Stokes Mitchell, Audra McDonald, and Marin Mazzie on the map. But you needn’t draw odious comparisons now because this cast is just dandy. Christiane Noll’s patrician and warmly empathetic manner, and limpid voice make her a worthy successor to Mazzie’s Mother. Quentin Earl Darrington is a tougher Coalhouse than Mitchell but no less affecting in the tender moments, and Stephanie Umoh makes a lovely Sarah, though (small carp) I did, at times, have some trouble understanding her lyrics.

Bobby Steggert as Younger Brother and Robert Petkoff as Tateh are outstanding, but Ron Bohmer as Father, Donna Migliaccio as Emma Goldman (the most fleshed out of the historical figures), and Christopher Cox as the prophetic Little Boy (“Warn the Duke,” he keeps repeating, in reference to the World War I igniting assassination soon to come in Sarajevo) are all fine.

Marcia Milgrom Dodge’s glorious production – she's done both direction and choreography -- began at the John F. Kennedy Center for the Performing Arts. She directs with a sure sense of narrative and her astute blocking of the cast on the multiple levels, and the frequent use of silhouette is striking.

The passing of the tires during the big “Henry Ford” number is one of countless striking eye pictures. As is Sarah’s descending the stairs after Coalhouse’s repeated visits to New Rochelle every Sunday, surely one of the most heart-stirring moments in all of musical theater, and beautifully handled here.

This is a moving, goose bump-guaranteed experience and simply the best musical currently on Broadway.