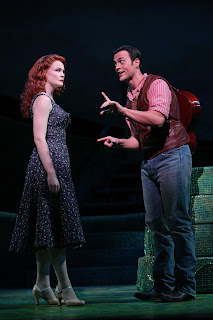 When it was first hinted that Encores’ sparkling presentation of the 1947 Burton Lane-Yip Harburg musical might make a Broadway transfer, some cynical souls confidently predicted it would never happen. For all the show’s charm in its semi-staged concert version, it was perhaps just too old-fashioned for a regular run that would appeal to mainstream audiences, especially in the current economy.

But here it is, more or less intact, and audiences – if “my” audience and Variety’s reports of a box office spike are any indication -- are loving it. The full-sized orchestra -- led feelingly by Rob Berman -- is now in the pit, unlike Encores previous transfers “Chicago,” “Wonderful Town,” and “Gypsy.” With the orchestra out of sight, John Lee Beatty’s set (atmospherically lit by Ken Billington) allows for much greater mobility. And, of course, there are no scripts in hand.

Some who only know the show from its well-loved songs “How Are Things in Glocca Morra?” and “Look to the Rainbow” are actually surprised by the show's rural Southern setting, and its book (by Harburg and Fred Saidy) which deals so forthrightly with matters of class and race.

Finian, a charming Irish rogue, lands in the fictitious state of Missitucky with his daughter Sharon. Hot on their heels is Og, a leprechaun who’s after the crock of gold Finian has “borrowed” with a notion of burying it and having it grow as does (he assumes) the gold at Fort Knox. Father and daughter befriend farmer Woody and his mute sister Susan – and the black and white tobacco sharecroppers – helping them keep their land from the bigoted Senator Rawkins.

It is indeed still quite astonishing that such a mainstream musical would reflect Harburg’s socialist leanings to the extent it does. But the troublesome (to some) plot element of the racist Senator’s (David Schramm) transformation into a black man, which gives him a lesson in tolerance, is here neatly solved by having the part double-cast to avoid any suggestion of blackface.

Matters of political correctness – real or imagined -- aside, it’s a joy to hear the score – with its great standards like “Old Devil Moon” “If This Isn’t Love,” and “When I’m Not Near the Girl I Love” so authentically presented. The Irish Repertory Theatre’s small-scale revival in 2006 – with the delightfully cast Melissa Errico, Malcolm Gets, and Jonathan Freeman – was a charmer, but this full-scale mounting is the real deal.

Striking red-head Kate Baldwin makes a beautifully poised, especially rich-voiced heroine. Cheyenne Jackson confirms his status as one today’s most satisfying leading men. Despite a slightly contemporary-sounding projection – occasionally true of Baldwin, too -- he has shown he can take on the classic roles (like Joe in Encores' “Damn Yankees”) with aplomb. Here, he and Baldwin really click. Alina Faye takes dancing honors as the mute (till the ending) Susan the Silent, Woody’s sister.

Terri White (a carryover from the Irish rep production) reprises her sensational rendition of the jazzy “Necessity” garnering, by far, the biggest hand of the first act, while Cooper’s “The Begat” (sung with Bernard Dotson, James Stovall, and Devin Richards) carries the second act honors.

Jim Norton’s performance as rascally Finian grounds the whole and, to the extent possible, avoids stereotype. The adapters – David Ives at Encores, and Arthur Perlman here – have given his primarily non-singing character all the vocal bits that Fred Astaire did in the surprisingly faithful 1968 film version from Francis Ford Coppola (with Petula Clark, Tommy Steele, and beautiful Ray Heindorf orchestrations), lines that were originally Sharon’s.

Toni-Leslie James’ costumes nostalgically evoke the 1940’s, and she really goes to town with the outlandish outfits -- finery ordered from a Sears & Roebuck-like catalog -- in the satiric second-act opener, “When the Idle Poor Become the Idle Rich.”

More so than other vintage musicals that we’ve seen in revival – the Rodgers & Hammerstein shows, “Show Boat,” “Guys & Dolls” – this one gives you the palpable feel of its original era, not a bad thing. Warren Carlyle’s direction and choreography seem satisfyingly true to the spirit, old-school in the best sense.

As you might expect in a show involving leprechauns, supernatural wishes, spells, and like, there’s also a copious use of magic tricks expanded since Encores, courtesy of consultant Matthew Holtzclaw. But make no mistake; this is a show that needs no wizardry. It's musical comedy at its most truthfully heartfelt and sublime.