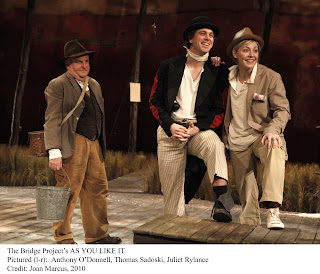 Sam Mendes’ Bridge Project – a joint venture of BAM, London’s Old Vic, and Neal Street – scores another triumph with this lovely mounting of Shakespeare’s ever-fresh pastoral comedy, capturing the work’s wondrous evolution from darkness to redemptive light, and striking an ideal balance of the playful and profound.

Anchored by Juliet Rylance’s luminous performance as Rosalind, daughter of the banished Duke Senior who’s been ousted by his evil brother Duke Frederick and taken refuge in the Forest of Arden.

After Frederick, in a fit of paranoia, decides to banish Rosalind from court as well, she and her beloved cousin Celia (Michelle Beck) flee to the forest.

The Bridge Project’s mix of British and American actors make for generally homogeneous results. The latter mostly eschew British accents or, at most, affect a mid-Atlantic compromise.

Though he’ll take on Prospero later this season, Stephen Dillane here has the smaller but significant role of Jaques, who sardonically interjects his dour reflections on life throughout the evening. His first moments on stage include a rendition of “Who doth ambition shun,” sung, hilariously, as Bob Dylan. Later, his “Seven Ages of Man” speech ranks with the best.

Apart from that particular bit of musical whimsy, the songs – of which “As You Like It” sports quite a few – are set to unusually pleasing airs by Mark Bennett.

Beck makes a delightful sidekick to Rylance, and Christian Camargo is an ardent, beautifully spoken Orlando, radiating the requisite natural born decency right from the start, in contrast to Edward Bennett as his scheming elder brother Oliver. The parallel good/bad brothers -- Frederick and the gentle Duke Senior -- are impressively embodied in Michael Thomas who doubles both roles.

Veteran Alvin Epstein is superb both as Orlando’s feisty old servant Adam who, in Mendes’ concept, dies at the end of the first act, a heartstoppingly poignant moment, and then, thankfully, returns in the second act as the dotty country vicar.

It’s Rylance who sparkles throughout, especially ingenious in the concluding revelation scene when her boyish disguise – very cutely outfitted by Catherine Zuber whose costumes are outstanding as usual -- is, at last, thrown off, and delightful in the epilogue which closes the play. If there’s any justice, her work here should jump-start her career as the role famously did for Vanessa Redgrave.

Though he never veers radically from tradition, Mendes employs numerous original and imaginative bits of business, the humanity of the play most vividly and touchingly conveyed.

Tom Piper’s set – and Paul Pyant’s brilliant lighting -- contrasts the dark, distinctly inhospitable forest of the first act with the verdant, regenerative blossoming of the second.