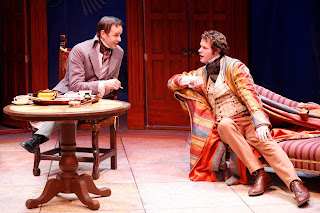 Kudos to Irish Rep for yet again resurrecting a little-performed musical based on Oscar Wilde. As with Noel Coward’s “After the Ball,” adapted from “Lady Windermere’s Fan,” the company has come up with a winner.

Neither “After the Ball” nor this musicalization of “The Importance of Being Ernest” is a landmark of musical theater, but each provides myriad pleasures, and in any case, “Ernest” is a far more cohesive work than Coward’s.

With book and lyrics by Anne Croswell and music by Lee Pockriss – who teamed again for the musical version of “Tovarich,” Vivien Leigh’s Tony-winning musical debut, 1960‘s “Ernest” is fondly remembered for its fine Columbia cast album (now on CD, courtesy of DRG), and it is indeed a stylish, tuneful collection of songs.

Hearing them in the context of a full production is just a few pegs less satisfying. Wilde’s dialogue sparkles with so much unbeatable wit that the songs can’t help but register on a less exalted plane (clever though Croswell’s lyrics are, on their own terms), and Wilde’s construction is so economical that anything extraneous seems slightly intrusive. “My Fair Lady” is one of those rare exceptions of genius where music and lyrics are all of a piece with highly literate source material.

Still, under Irish Rep Artistic Director Charlotte Moore’s deft, unfussy direction, both elements are well served. On the one hand, this is a perfectly credible performance of Wilde (albeit abridged), while those songs are all charmingly rendered.

Mark Hartman’s musical direction (an ensemble of harp, cello, violin and keyboard) provides zesty accompaniment. The opening ensemble number about the upper classes always being in arrears has been excised (as there’s no chorus here), but the rest is, as remembered.

Ace hoofer Noah Racey makes a confident Jack and proves he can play English, while Ian Holcomb is an appropriately rakish Algy. On the distaff side, Annika Boras and Katie Fabel are well contrasted as Gwendolen and Cecily, and make the most of their deliciously bitchy first encounter. Kristin Griffith and Peter Maloney are delightfully characterful as the romantic-minded tutor Miss Prism and befuddled clergyman Dr. Chasuble respectively. Beth Fowler is a satisfyingly dragon-like Lady Bracknell.

James Morgan’s economic scenic design – one backdrop serving for both Jack and Algy’s flats in the first act, and another Jack’s country manor in the second – along with Linda Fisher’s costumes reflect the overall tasteful simplicity of this charming production which, following the superb production of “The Emperor Jones” as it does, impressively affirms the versatility of this treasurable company.