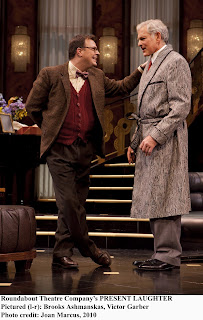 By Noel Coward’s own admission, he wrote “Present Laughter” “with the sensible object of providing (himself) with a bravura part,” But critics of the original 1943 London production, much to the author’s surprise, praised the play as well. Appropriately enough, it concerns a Coward-like star, Garry Essendine, and his devoted, tightly knit support group which includes his ex-wife, producer, agent, and secretary.

Since that original production, it has proven a worthy vehicle for stars such as George C. Scott, Tom Conti, Albert Finney, Peter O’Toole, Ian McKellan, and many others. I first encountered the play in a memorable production with the hilarious Donald Sinden in London in the 1980s. The veteran actress and singer Elizabeth Welch sat to my right, and two of us were so doubled up with uncontrollable laughter, we instantly bonded. That production is thankfully preserved and available in a BBC Films boxed set devoted to Coward.

The 1996 Broadway production with Frank Langella rated high on the laugh meter with its star hamming it up uproariously.

The 1946 Broadway production with Clifton Webb was not so well received, though Webb was praised. Coward himself found the cast, Webb excluded, “tatty and fifth rate” and the production “lamentable.”

Coward would have had no complaints about the physical production of Roundabout Theatre Company’s revival, played as it is on Alexander Dodge’s sumptuous Art Deco set with its cast bedecked in Jane Greenwood’s stylish duds.

The problem is it’s no where near as rib-ticklingly funny as it ought to be. Nicholas Martin directs with intelligence, but even as farcical situations escalate in the second and third acts, the production never catches fire.

The versatile Victor Garber is a pro, and knows how to mine laughs from Coward’s dialogue, gamely essaying comic business like a quick glance in the mirror every time the doorbell rings. But he’s missing that larger than life quality so essential to the role.

The supporting players, which includes Harriet Harris as Essendine’s sardonic secretary Monica, Lisa Banes as the sympathetic ex-wife Liz, Marc Vietor as agent Morris besotted with Joanna; and Richard Poe as the cuckolded producer Henry, is certainly competent across the board, if lacking the authentic edge a British cast might offer. And it’s really only Ashmanskas as Essendine’s manically adoring admirer who delivers the requisite comic goods. Flitting about the stage, offering anyone fool enough to take his hand a violent arm-dislocating handshake, he suggests the comic flair that’s missing elsewhere.

The production is classy, tasteful, and great to look at, but a little short of present mirth.