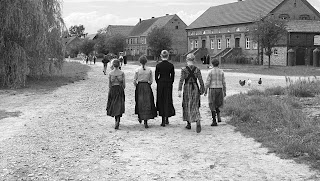 This is an austerely fascinating story of strange happenings in the small German village of Eichwald just before World War I: a doctor is badly injured when his horse is intentionally tripped; a privileged child is tortured; a mentally challenged boy goes missing. And no one is talking.

The principal characters here are the doctor (Rainer Bock), the midwife in his employ (Susanne Lothar) with whom he’s having a sordid affair; a harsh Protestant pastor (Burghart Klaussner) who rules his children with an iron hand, insisting one wear a white ribbon symbolizing purity; the baron (Ulrich Tukur) who owns half the village and his desperately unhappy wife (Ursina Lardi); his steward (Josef Bierbichler) whose bitter son blames the baron for his mother’s accidental death, and a dedicated schoolteacher (Christian Friedel) in love with the baron’s nanny (Leonie Benesch).

Exquisitely shot in crisp black and white by Christian Berger, the 145 minute film would seem to be an indictment of the German national character, and a metaphor for the rise of Nazism.

Directed and written (with the “contribution” of Jean-Claude Carriere) by Michael Haneke, who brought us the excellent “Cache” (with Daniel Auteuil and Juliette Binoche), and the seriously creepy “Funny Games” (both German and American versions), this film has already been honored with the Palme D'or at Cannes, has the markings of a classic.

Though the subject matter is grim, the characters mostly unlikable or downright repellent, and Haneke’s direction uncompromising, you should nonetheless find yourself riveted throughout. Like “Cache,” the film doesn’t give us clear answers about the perpetrators of the mysterious crimes, and that may be a turn-off to some, but the ambiguity makes the whole that much more powerful.

(Rated R by the MPAA for some disturbing content involving violence and sexuality.) Print this post
Posted by Harry Forbes at 8:15 AM