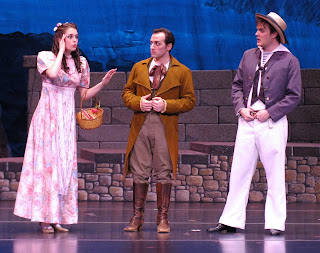 Though several notches below “The Mikado,” “The Pirates of Penzance,” and H.M.S. Pinafore,” on the popularity scale, “Ruddigore” – Gilbert & Sullivan’s less-than-enthusiastically received 1887 follow-up to “The Mikado,” a clever spoof of theatrical melodrama – gets one of its infrequent mountings by the New York Gilbert & Sullivan Players.

Though the original production eked out a respectable run, the D’Oyly Carte Opera Company didn’t revive the piece until the 1920’s in a considerably altered adaptation. Numbers were dropped, and there was a new overture composed by Geoffrey Toye.

In a Cornwall fishing village, painfully shy farmer Robin Oakapple (David Macaluso) loves dainty Rose Maybud (Sarah Caldwell Smith) whose every move is dictated by her trusty book of etiquette. She doesn’t know that Robin is, in fact, scion of the notorious Murgatroyds who, after a witch’s curse years before, must commit a crime a day or perish. He has been living in happy anonymity for years while his younger brother Despard (Richard Alan Holmes) has had to carry out the burdensome injunction. When Robin’s foster brother Richard (Dan Greenwood) returns from sea and falls for Rose himself, he blows Robin’s cover, and the latter must finally assume the duties of wicked baronet.

The cast on this occasion is vocally strong, and, along with the orchestra, cleanly miked. Holmes brought his rich baritone, crisp diction, and comic assurance to his good/bad role. Greenwood’s tenor was sweet and incisive, and Cornish accent reasonably authentic. Caitlin Burke made a particularly good and original Mad Margaret, Despard’s cast-off fiancée whom he marries when he finally frees himself of his evil deeds.

Best of all was Erika Person as Rose’s aunt, Dame Hannah. Her natural acting and artful singing made the most of that relatively small part. In fact, the usually dull second act ballad, “There Grew a Little Flower,” sung in tandem with the ghost of her long-lost fiancé Sir Roderic (the excellent David Wannen) was, for me, the musical and dramatic highpoint. Sung with vitality as an accusation to Roderic for his abandonment of her years before, the duet ended with a poignant clinch that had a powerful emotional resonance.

The second act was, all in all, stronger than the slightly draggy first. The amusing scene with Despard, Mad Margaret, and Robin was brilliantly done, Burke particularly persuasive in her bursts of madness, and leading into that ultimate G&S patter song, “My Eyes are Fully Open,” also exceptionally well performed.

So too, Despard and Margaret’s “I Once Was a Very Abandoned Person” and the first act Richard-Despard duet, “You Understand,” were filled with marvelous stage business courtesy of Bergeret and co-director/choreographer David Auxier. Elsewhere, though, the company’s propensity for manic staging – the loopy business for the perpetual bridesmaids, for instance – veered towards amateur antics. Some stillness would be welcome.

Albère’s pretty first-act set looks rather spare on the large stage, but the second act picture gallery where the ancestral Murgatroyd portraits come to spooky life – designed in homage to Edward Gorey – made a fine eyeful.

Bergeret’s conducting was alternately vigorous and graceful and, as noted, he led an evening high in musical values.