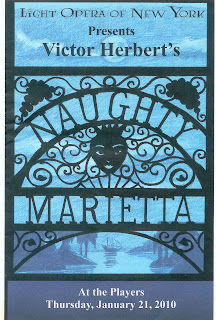 The fledgling Light Opera of New York company presented its first full-length, staged production at the Players Thursday evening, and let it be said at the start that the quality boded well for the remainder of the season, one devoted entirely to the works of America’s greatest operetta composer, Victor Herbert.

They chose his most famous and operatic-styled operetta, a rather audacious choice given the vocal demands of the score, and pulled it off with considerable aplomb. Beautifully costumed (by Lydia Gladstone) and performed mostly off-book (admirable, considering this was only a one-night only performance), the show pleased the very full house.

The story involves an Italian countess who’s run off to 18th century Louisiana incognito on board a ship of casquette girls intended for the unmarried settlers, and falls in love with Captain Dick (John Tiranno), leader of a motley band of peace-keeping adventurers.

Once in New Orleans, she impersonates the absent son of an Italian puppeteer (William Tost) to avoid detection, and evades the amorous attentions of the corrupt son (Cory Clines) of the Lieutenant Governor Grandet (Richard Holmes). Etienne is, in fact, a notorious pirate, Bras Prique, and has a Quadroon (that is, one quarter, black) mistress and slave Adah (Maria Elena Armijo) whom he treats in cad-like fashion.

The score was presented nearly complete though some of the ensemble portions were shaved, and comic Simon O’Hara (amusing Matthew Hughes) lost his “It’s Pretty Soft for Simon.” But the voices were generally of high quality, and the accompaniment – a group that calls itself the Ambience Strings (two violins, a cello, and a bass) – provided pleasing support under music director Stephen Francis Vasta on keyboard.

The books of some of the Herbert works are seriously problematic for a modern audience, and Rida Johnson Young’s “Marietta” libretto was roundly criticized, even in its day, for plot inconsistencies and especially some crass ethnic stereotyping. The character of Simon “O’Hara,” for instance, was originally the worst sort of Jewish stereotype despite that name, and here, he’s played as inoffensively Irish.

Alyce Mott, the tireless Herbert champion who, together with conductor Dino Anagnost of the Little Orchestra Society, has provided New York with some marvelous Herbert concerts at Alice Tully Hall, has supplied her performing edition previously utilized at Lincoln Center in 2006.

As before, she utilizes a narrator in the shape of a new character, Marie Le Valleau, a French Creole Voodoo Queen. Tracy Bidleman handles her expository function with flair, though the device does begin to wear thin by the second half. Still, a narrator is a sensible substitute for heavy-handed dialogue. Would they had cut more!

Kristin Vogel, channeling 1950’s star Ann Blyth, made an effervescent Marietta, and looked smashing in her gowns. She was vocally assured, too, though perhaps pushed too hard in her big vocal moments. (Herbert is said to have admonished original star Emma Trentini for doing just that.)

The pleasantly affable Tiranno hardly seemed a Central Casting candidate for “rugged outdoorsman,” but sang capably, and likewise, Armijo’s uncomplicated persona didn’t really suggest the exoticism of Adah, but her singing of “Neath the Southern Moon” and elsewhere was spot on.

Clines and Holmes made strong-voiced Grandets, son and father, but all Holmes got to sing in his principally comic role was the “Sweet By and By,” which though originally intended for his character back in 1910, was quickly reassigned to the soubrette Lizette, here excised. The same was done in the New York City Opera production of several years ago, which restored much of the score, but did its own share of textual jiggling, too.

The great “Live for Today” quartet which morphs into a big ensemble was the vocal highpoint, but the music was well handled throughout, and even though the ensemble consisted of merely four men and four women, they made a surprisingly full-bodied blend in the intimate Players auditorium.

Director Gary Slavin led a well paced performance, and made the most of the limited playing area, utilizing the aisles to good effect.