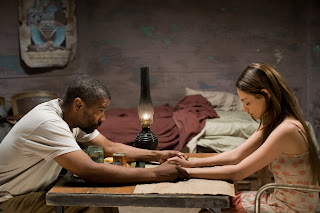 Here’s another of those post-apocalyptic fables with a stalwart hero intent on surviving on a bleak, decimated planet, scrambling for food and supplies, and coping with marauding hordes, some of them cannibals. Think “The Road” but with plenty of action-adventure elements.

In place of Viggo Mortensen, it’s Denzel Washington doing his best to survive in an inhospitable world. Eli is a peaceable, soft-spoken man, unless he’s crossed, as a gang of leathered thugs (“hijackers” in the movie’s parlance) learn on a desolate highway when they try to get the better of him, or, a bit later, a mangy outlaw who threatens Eli in a saloon.

When provoked, Eli becomes a veritable samurai wielding a mean and deadly sword. Elsewhere, he proves himself an expert marksman, and deft practitioner of martial arts. He’s determined to reach the West coast, much as Mortensen needed to get to the sea with his young son.

Along the way, he stops at a lawless Western-looking town to barter for supplies (and charge his iPod), and encounters the ruthless boss Carnegie (Gary Oldham) who has control of the water supply and whose brutal gang is sent out on book hunting missions. Wouldn’t you know Carnegie is looking for the very same book that Eli has in his satchel, and (small spoiler) it doesn’t take long for us to figure out that that book is the Bible.

We learn that the Bible may, in some way, have been responsible for the cataclysm of years before, and that all extant copies were ordered destroyed shortly thereafter. Eli believes the book can save mankind, providing a blueprint for society as it rebuilds itself; Carnegie that acquisition of the book will give him control over what’s left of the ragtag populace. And there you have the central conflict.

Carnegie has a beautiful blind wife/lover (Jennifer Beals), and a sexy stepdaughter Solara (Mila Kunis). When Carnegie forcibly tries to wrest the book from Eli – even sending in Solara to seduce him – Eli is forced to shoot himself out of town. Though Eli wants no part of her, Solara follows after him, and she is nearly raped by thugs. Eli rescues her and he’s stuck with her from that point on, with the bad guys, including Carnegie’s bodyguard Redridge (Ray Stevenson) who covets Solara, in hot pursuit.

Along the way, they encounter an American Gothic farming couple, George and Martha, ludicrously cast with hammy Brits Michael Gambon and Frances de la Tour, neither of whom can claim convincing American accents among their otherwise impressive thespian skills.

Despite a hero with a noble mission – preservation of the Good Book – Gary Whitta’s script allows for plenty of pretty brutal violence. Sex is minimal but Kunis and Lora Cunningham as the hijackers’ decoy look less like apocalyptic survivors than sexy babes from a TV reality show.

Some Christian groups may wax ecstatic over Eli’s noble mission and his frequent quotes from the King James edition, but though I wasn’t a fan of “The Road,” that film rates higher on the spiritual scale in showing its hero trying to hold to moral standards despite temptation to resort to his baser nature.

Visually, “The Book of Eli” is at least a bit more interesting and stylish than “The Road.” Both present intentionally bleak landscapes drained of most color. Here, pointedly, there’s not a trace of blue in this sky. But, at least, there’s more going on here, and the Hughes Brothers’ (Allen and Albert) direction is consistently taut throughout.

Washington’s character is fairly taciturn, when he’s not nobly quoting Scripture, but he has a commanding presence, and you never doubt his conviction to follow through with his single-minded mission.

Oldham’s adversary could have been a fascinating villain – like, for instance, Christopher Wentz’s Nazi in “Inglourious Bastards” -- but his character is much less interesting, and it’s a pity the script doesn’t allow for more verbal interplay between the only characters who might be considered intellectual equals.

(Rated R by the MPAA for some brutal violence and language.) Print this post
Posted by Harry Forbes at 8:33 AM