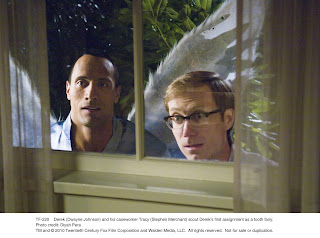 Only a real he-man like Dwayne Johnson could so unflinchingly play a character who, in the course of the film, must “learn to embrace the fairy spirit,” at one point even wearing a pink tutu, without a suggestion that fairies are anything but those magical sprites from storybooks.

Of course, it helps that he’s playing Derek, a tough-as-nails if disillusioned hockey player nicknamed the “Tooth Fairy” for his propensity to knock out his opponents’ teeth. (His own, by the way, are dazzlingly, blindingly, intact.)

But Derek hasn’t scored a goal in years. He doesn’t believe in dreams, bitterly opining that they only lead to disappointment, as he tells a bright-eyed young fan in an early scene, practically reducing the latter to tears.

When he nearly breaks the news to Tess that there’s no such thing as a “tooth fairy,” he’s summoned to Fairyland for “dissemination of disbelief” a “dream killer” guilty of being a “first degree dasher of fantasy.” Chief Tooth Fairy Lily, played by Julie Andrews (looking remarkably youthful) sentences him to a two-week sentence as a bona fide “tooth fairy,” sneaking into homes, removing the child’s tooth from underneath the pillow, and leaving a dollar in its place.

He grumbles every step of the way, and derides his bespectacled administrative fairy Tracy -- humorously played by tall and lanky Brit Stephen Merchant,” co-creator of the original version of “The Office” – who envies Derek’s fairy wings.

Gradually, as Derek bonds with Carly’s kids, he comes to understand the importance of dreams, even as he reassesses his own performance on the ice, where the team’s new young star player Mick (Ryan Sheckler) has been treating him with cool condescension.

Michael Lembeck directs the disparate domestic scenes, hard-driving hockey sequences, and Fairyland shenanigans capably, but the kid-friendly script – apparently the work of five (count ‘em!) writers – needed more genuine wit, in addition to all the sentiment. Though it’s at best pleasantly diverting than outright funny, the narrative generally holds your interest. The believe-in-yourself and use-your-imagination themes are repeated to death, which is fine for its intended (small fry) audience, if hardly anyone else.

Johnson is a natural screen presence, and as he’s proven in previous films, works especially well with kids and has an easygoing likability. Judd has little to do but play a standard sweet, loving mom. It’s a waste of her talent, but she’s fine. Andrews good naturedly kids her starchy image. An unbilled Billy Crystal is an asset as a fast-talking dispenser of essential fairy tools: shrinking paste, invisibility spray, amnesia powder, etc.

Production designer Marcia Hinds has come up with an attractive giant Fairyland set, a sort of gargantuan train station.

This is best for the kids, but their adult minders shouldn’t be too unhappy to come along for the ride. The ending ties things up nicely, and there’s a very cute coda with Andrews and Crystal.

(Rated PG by the MPAA for mild language, some rude humor and sports action.) Print this post
Posted by Harry Forbes at 8:29 AM