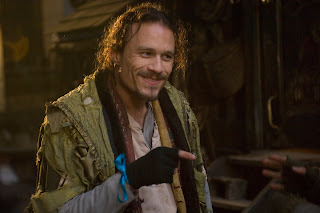 If nothing else, “The Imaginarium of Doctor Parnassus” provides a fascinating final look at the brilliantly creative Heath Ledger who died while this film was in production.

Luckily, the structure of the plot allowed three actors – Johnny Depp, Jude Law, and Colin Farrell – to finish Ledger’s unfilmed scenes, a brilliant solution on the part of director and co-writer Terry Gilliam.

As the plot concerns a present-day traveling show involving a magic mirror which can unleash the imagination of anyone who passes through its shiny silver-stripped surface, leading to an imaginary fantastic world, the three stand-ins get to play different aspects of Ledger’s character – Depp, Law, and Farrell, in that order, the last embodying the least attractive traits -- in the mirror world.

Despite all the star power – and this includes Christopher Plummer, a commanding if inscrutable presence in the titular part -- the film is a major disappointment, some might even say a turkey, albeit a colorful one.

Its rambling Faustian narrative involves Parnassas, centuries earlier, making a pact with the devil, Mr. Nick (Tom Waits). In exchange for everlasting life, Parnassus had promised his daughter Valentina (Lily Cole) to him at the age of 16.

Now in a panic, as the girl has reached the appointed age, Parnassas makes another wager with Mr. Nick. Whichever of them first wins over five souls gets the girl. Ledger’s character Tony -- a mysterious stranger with a shady past whom the troupe rescued after a suicide attempt, and is now helping them improve their act – tries to help Parnassus win the bet.

The first scene of Ledger’s character Tony has him hanging (a would-be suicide) off Blackfriars Bridge, for reasons not entirely clear till much later in the film. He’s rescued by the troupe, and eventually brought back to life, scruffy and tousled, and using a convincing English accent.

The visual aspects of the film – particularly those involving the mirror world – are dazzlingly sumptuous in the trademark Gilliam style. Cinematographer Nicola Pecorini, design and art director Dave Warrne, production designer Monique Prudhomme have all done outstanding work, and for some that may be another cogent reason to catch the film.

But the script is frustratingly banal, and pseudo-commedia dell'arte characters of Valentina and particularly emcee Anton (Andrew Garfield) and midget Percy (Verne Tryoer) are annoying in the extreme. The action is dominated by far too much slapstick for my taste.

Still, those with a higher tolerance for this sort of whimsy, especially when it comes from such an imaginatively fertile mind as that of Gilliam, and certainly fans of Ledger, who despite his untimely death, has a satisfying amount of screen time, may find this chaotic mishmash rewarding.

(Rated PG-13 for violent images, some sensuality, language and smoking.) Print this post
Posted by Harry Forbes at 10:22 AM