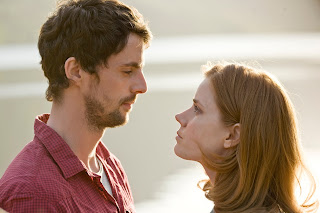 Yes, it’s completely predictable. And yes, much of what passes for humor is pretty lame. And yet. And yet.

With Amy Adams in endearingly comic mode – even as Deborah Kaplan & Harry Elfont’s script tries your patience in painting her as such an obstinate, control freak – and Matthew Goode in his most ingratiating screen role yet, and location Irish scenery that sometimes takes your breath away, this formulaic romantic comedy is an entirely pleasant couple of hours.

She’s Anna, a Boston real estate agent – well, “stager” (she decorates apartments so they’ll be more attractive for sale) – and when her superficial cardiologist boyfriend (Adam Scott) fails to propose after four years, she follows him to Ireland to pop the question herself, as per the Irish legend that women may do this only on February 29 in leap years.

Bad weather diverts her plane to Wales, and then the boat she hires to take her to Dublin over stormy seas is diverted to Dingle. She finds herself in the town’s all purpose B&B/pub/taxi service, run by scruffy Irish bloke Declan (Goode). It’s hate at first sight for each of them, especially when her efforts to charge her cell phone cause a major power outage, but after the weather clears, he agrees to drive her to Dublin for a fixed price, and they are beset by all manner of calamity along the way (e.g. cows, hail storms, mud).

They fight incessantly, but despite themselves, begin to enjoy each other’s company, though they won’t admit it to themselves. As there is good chemistry between Adams and Goode, the film kicks into gear at this point, and grabs you.

Adams continues to prove one of the screen’s most delightful stars. And the versatile Goode plays his taciturn Irish character with total conviction. The supporting cast of locals provides some charm. John Lithgow is wasted in a virtual cameo as Anna’s ne’er-do-well dad. And Scott walks the appropriate line between attractive and smarmy.

Formulaic or not, director Anand Tucker’s has the right idea in his pacing of this old-fashioned romance. And rather refreshingly, the leads barely exchange a kiss, with the restraint rendering the final clinch – oh, come on, you know they will eventually get together! – all the more satisfying.

(Rated PG for sensuality and language.) Print this post
Posted by Harry Forbes at 10:49 AM