Anything Goes (The Roundabout Theatre) 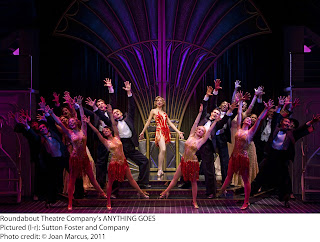 Years ago – on “The Dick Cavett Show” – legendary producer-director Jed Harris explained that in younger days, whenever he happened upon a particularly wonderful musical, nothing pleased him more than attending once a week, sitting in his favorite box. This was his nirvana. And the example he cited was, in fact, “Anything Goes.”

Watching the spanking revival mounted by Kathleen Marshall for the Roundabout, I know exactly how Harris felt. This show – in the expert version fashioned for the 1987 Patti LuPone revival at Lincoln Center by Timothy Crouse and John Weidman(adapted from the P.G. Wodehouse and Guy Bolton and Howard Lindsey and Russel Crouse original) -- is pure pleasure.

The score is one of Porter’s best, and when it’s performed as well as it is here, why indeed look elsewhere?

The 1987 version – which wisely retains virtually every song from the original and the two Porter additions that have become de rigueur, “It’s De-Lovely” and “Friendship” – has been given a rejuvenating face-lift, with snazzy orchestrations by Bill Elliott, supplementing Michael Gibson’s already excellent ones, under Rob Fisher's musical supervision.

At the center of it all is the smashing Sutton Foster who, though unlike LuPone and the role’s originator Ethel Merman, wouldn’t seem a “natural” Reno Sweeney, her interpretation – a slinky blonde with confident swagger, a dollop of self-deprecating humor, and a dash of Mae West – are just what’s called for. And her singing, starting with her opening ballad, “I Get a Kick Out of You” and virtuoso dancing is really, to quote Mr. Porter, “the top.”

She is surrounded by a spot-on cast. There’s Joel Grey at the top of his present-day game as Moonface Martin, Public Enemy #13. John McMartin is a comic delight as the perennially tipsy stockbroker Elisha Whitney. Colin Donnell as Billy Crocker sports Don Draper good looks, a stylish voice and again, quoting Cole, an impressively “nimble tread.”

Marshall works wizardry on all the musical numbers. The first act ends with the title song, an irresistible showstopper, which Marshall builds and builds, sending the audience to intermission in a semi-delirious state. We’re not far into the second act before she and Foster top themselves with “Blow Gabriel Blow.” That’s when evangelist Reno and her “four angels” sock over the song, drop their capes, and Foster is transformed into a sexy Cyd Charisse-like vamp, while the trumpets blare in the best down-and-dirty fashion. Marshall works in all the revivalist gestures you want in this sort of number, and again, the audience is bowled over. In both of those strenuous numbers, by the way, Foster’s breath control is amazing.

Marshall’s choreography is wonderfully inventive, not just in those big numbers but the more intimate ones like Grey’s sweet “Be Like the Bluebird” which he performs with a blue spotlight; “Friendship” for Foster and Grey, with its vaudeville-like series of false endings; “Buddy Beware,” sung (rather roughly) by Jessica Stone as gangster moll Erma who’s otherwise a hoot and six muscular sailors; and“The Gypsy in Me,” wherein Lord Evelyn finally lets his hair down and dances a torrid tango with Foster.

Derek McLane’s various shipboard settings are versatile and cheery. Martin Pakledinaz’s stylish duds are knockouts. And Peter Kaczorowski’s daytime, nighttime and interior lighting effects are all they should be.

I’m ready to book my Jed Harris box for the remainder of the (just extended) run!