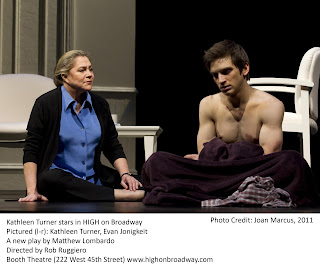 As a vehicle for Kathleen Turner, “High” keeps its valiant star on stage almost all evening, allowing her to run the gamut of emotions, with plenty of humorous lines amid a narrative as melodramatic as they come.

She’s Sister Jamison Connelly, a tough-talking drug counselor with a distinctly un-sisterlike vocabulary (the f- and s-words are thrown off unflinchingly throughout) who reluctantly takes on gay hustler Cody (Evan Jonigkeit), when her superior, Father Michael (Stephen Kunken) insists she do so, his true motivation (no, not what you might think) only revealed much later.

A recovered alcoholic and former user herself and, like Cody, one who spent a fair amount of time as a homeless street person, she resists at first because she knows how hopeless these cases can be. Adding to her skepticism is hearing of the death of a 14-year-old boy found in the hotel room where Cody himself nearly died.

But Father Michael won’t take no for an answer, and Sister Jamison agrees to work with the sullen, belligerent youth.

The confrontational scenes with the boy – including an especially lurid one when Cody falls off the wagon, and at the peak of his high, darts naked to and fro like the Alan Strang character in “Equus” and attempts to sexually attack the good sister -- are interspersed with monologues in which she reflects on her past and the tragic events which eventually led to her becoming a nun and her yearning for redemption.

Sister Jamison’s back-story is fairly hair-raising (and not terribly plausible). But even when that history and her personal demons are fully revealed, her initial resistance to taking Cody on as a patient is hard to swallow. After all, wouldn’t anyone in her position want to help a lost soul?

The conviction of the performances and the stylized staging balance the more over-the-top elements. Turner’s foggy voice and commanding presence, and Jonigkeit’s extremely realistic turn are both compelling. Kunken’s role is a fairly colorless one, but he plays it well enough.

Matthew Lombardo’s script is less risible when one learns of the playwright’s own former addiction. And for all its contrivance, it must be said that “High” does hold your interest.

The show has already posted a closing notice, so you need to see it by Sunday, if so inclined.