How to Succeed in Business Without Really Trying (Al Hirschfeld Theatre) 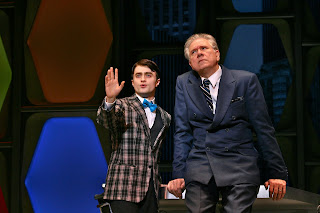 With the last of the “Harry Potter” films in the can, Daniel Radcliffe continues to make really smart career moves, as he has, in fact, done all along between films. The Rudyard Kipling bio on “Masterpiece Theatre” (he played the writer’s son), the very moving “December Boys” film, the impressive stage debut in “Equus” on both sides of the Atlantic, and now, an honest-to-goodness classic Broadway musical.

It’s no surprise that he succeeds beautifully, demonstrating as window-washer-turned-young-executive J. Pierrepont Finch, that he's a confident singer, a nimble dancer (despite self-deprecating comments in the press to the contrary), a thoroughly engaging presence adept at a flawless American accent, including some long, tongue-twisting stretches of dialogue.

I found some of director Rob Ashford’s choreography overly busy. On the other hand, the “Grand Old Ivy” and “Brotherhood of Man” numbers are bona fide showstoppers, with Radcliffe really keeping up with the intricate moves and acrobatics.

John Larroquette – who amusingly towers over Radcliffe -- is also terrific as J.B. Biggley, World-wide Wicket Company president, at one point using a megaphone in homage to the part’s legendary originator, crooner Rudy Vallee.

Tammy Blanchard can play sweet (the film “Bella”) and sexy (Louise in Bernadette Peters’ “Gypsy”). As Hedy LaRue, Biggley’s va-va-voom but none-too-swift mistress, she gets to do both. Ellen Harvey is appropriately starchy but warm as Biggley’s secretary.

Rose Hemingway makes a sweet devoted Rosemary, and a good physical match for Radcliffe. Mary Faber is a funny bespectacled Smitty. And Michael Park, Nick Mayo, Cleve Asbury, and Rob Bartlett are excellent as various stepping stones on Ponty’s rise to the top. Bartlett has a nifty double turn as Twimble, the head of the mailroom, and at the end, as Wally Womper, the chairman of the board, and does well by the “Company Way” anthem.

As Biggley’s ambitious nephew (and Ponty’s nemesis) Bud Frump, Chistopher J. Hanke makes the part his nerdy and smarmy own. Anderson Cooper proves a fine choice for the voice of the narrator, giving a different spin than Walter Cronkite’s avuncular approach in the 1995 revival.

I wasn’t wild about Derek McLane’s modular honeycomb set at first, however period appropriate, but it grew on me as the evening progressed, and it proved its versatility during some of the split-level numbers.

Ashford’s puts his own distinctive stamp on the aforementioned numbers and the “I Believe in You” set-piece. In that men's room number, the executives enter in conspiratorial pairs with trench coats and fedoras as they sing about having to “stop that man” while Radcliffe shaves solo front and center. The number reminded me of Ashford’s excellent work in the Donmar Warehouse “Guys & Dolls.”

Another plus of the production is the restoration of material cut from the 1995 production, including “Cinderella Darling” where Smitty and Rosemary’s other secretary friends urge her to capture the “prince” (Smitty).

Though Broadway’s predecessors in the role, originator Robert Morse and revival lead Matthew Broderick were more seasoned performers when they played Finch, Radcliffe is pretty damn good, and his youth and natural appeal are further plusses.

The book by Abe Burrows, Jack Weinstock, and Willie Gilbert is still one of Broadway’s most tightly constructed and funniest. Frank Loesser’s score is enjoyable as ever, even in Doug Besterman’s reduced orchestrations, and hearing it again makes a nice bookend to the recent Encores staging of his first hit, “Where’s Charley?”