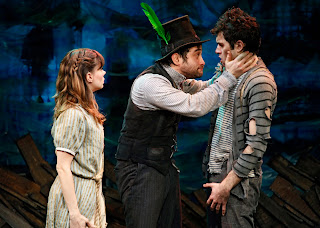 This adaptation of the first of Dave Barry and Ridley Pearson’s prequels to J.M. Barrie’s “Peter Pan,” is an imaginatively staged and predominantly humorous take on the book. With lines like “he's more elusive than a melody in a Philip Glass opera” and such, the creators are aiming to appeal to adults as much as, if not more than, youngsters. I noticed only a handful of kids at the evening performance I attended.

Adam Chanler-Berat plays the orphan boy who, in the course of the show, acquires the name Peter (and later Pan). It’s 1885, and together with his friends Prentiss (Carson Elrod) and Ted (David Rossmer), he’s being shipped off into slavery. But along the way, he encounters the resourceful Molly (Celia Keenan-Bolger) whose ambassador father Lord Aster (Karl Kenzler) on another ship has been entrusted with a trunk filled with priceless treasure.

Pirates and assorted villains (Matt D’Amico among them) intervene, including Captain Hook but then known as Black Stache (Steve Rosen at my performance, now alternating with the highly praised Christian Borle) and his assistant Smee (Kevin Del Aguila).

After much swashbuckling derring-do at sea, the youngsters find themselves on a tropical isle, run by an Italianate villain (Teddy Bergman) who plans to feed them to a giant crocodile, but by the time of the bittersweet conclusion, Peter is on his way to becoming the eternal youthful sprite we know, and Molly the future Mrs. Darling.

Rick Elice (of “Jersey Boys” and “The Addams Family” fame) has written the book adding puns and alliteration to ultimately wearying effect. Director Roger Rees, who made his name in the title part of RSC’s legendary “Nicholas Nickleby,” and clearly knows a thing or two about narrative storytelling, has collaborated with Alex Timbers of “Bloody Bloody Andrew Jackson.”

The result is something of an amalgam of those two earlier credits: a sometimes compelling yarn with actors assuming multiple roles (occasionally confusing) merged with “Andrew Jackson’s” jokey, sometimes groan-inducing puns (“You’ve made your bed, Pan” is one example), and a somewhat sophomoric tone.

As with Barrie’s original, there are some songs (by Wayne Barker), though not enough to categorize this as a musical any more than the original had been. Donyale Werle’s lovely Victorian proscenium frames the seafaring accoutrements of the first act, and blossoms into a lush island jungle setting in the second act. The latter opens with a chorus of (the all-but-one male cast) mermaids in drag casting their siren spell. Paloma Young’s period costumes have the requisite flair.

Keenan-Bolger is quite delightful as the serious-minded Molly trying to mask her adolescent stirrings for Peter, paralleling the Wendy-Peter dynamic of the Barrie version.

Throughout, there are hints of the future elements of “Peter Pan”: the conceit of clapping if you believe, the ticking clock inside the crocodile, and so on.

The play is nearly two and a half hours, and at the end of it all, the audience responded with a good-natured ovation. For my part, though appreciating the talent on stage and the resourcefulness of the staging, I’d have preferred a shorter evening, a less precious tone, and a generally straighter approach with less jokey and anachronistic humor.