Catch Me If You Can (Neil Simon Theatre) 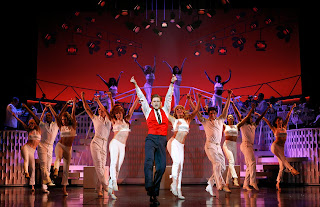 A great deal of talent – much of it comprising the same team that generated the long-running “Hairspray” -- has gone into this latest cinematic adaptation, this one taken, of course, from the 2003 Steven Spielberg film with Tom Hanks and Leonardo DiCaprio. Terrence McNally provided the effective book.

But the stylized, somewhat cynical, way in which he and the other creators have chosen to tell the true-life story of FBI agent Carl Hanratty (Norbert Leo Butz) in dogged pursuit of con artist Frank Abagnale, Jr. (Aaron Tveit) who changes names and professions (pilot, doctor, and lawyer) with dizzying alacrity, works against the feel-good qualities that made "Hairspray" so endearing.

This, despite a sentimental undercurrent of growing affection between pursuer and pursued, with Hanratty becoming a father figure to young Frank, after the latter’s French mother (glamorous Rachel de Benedet) walks out, and his alcoholic con artist father (Tom Wopat, solid as ever) can't raise him. (Both are lonely and lacking in familial affection.)

Still, there’s no denying the slickness and polish that has gone into the mounting, and who says “feel good” has to be part of the package anyway? Marc Shaiman and Scott Wittman have fashioned their score after the swinging songs of the period that might have been rendered by Frank Sinatra, Dean Martin, or Carlos Jobim. Several songs have been dropped since the show’s tryout period, but the score still remains a strong one, albeit with an emphasis on the flashier, more hard-driving numbers.

Amidst those, the Christmas anthem, “My Favorite Time of Year,” which closes the first act; Hanratty and Frank, Sr.’s bar duet, “Little Boy, Be a Man,” and Paula’s “Don’t Be a Stranger” provide less frenetic contrast.

Tveit brings boyish good looks and much appeal to the DiCaprio role, but the amazing Butz dominates, completely immersing himself in the role of schlumpy agent, and stopping the show more than once, starting with his “Don’t Break the Rules” anthem.

Kerry Butler as nurse Brenda whom Frank genuinely falls for late in the show has little to do till then, but effectively and movingly belts out her feelings in the eleven o’clock number “Fly, Fly Away.” Wopat’s smooth vocalizing throughout is another plus, as he makes his less than admirable character both pitiable and empathetic.

Jack O’Brien directs the show tightly, and Jerry Mitchell’s choreography – often employing a chorus line of the airline stewardesses and nurses in Abignale, Jr.’s life – keeps the momentum going, and accurately mirrors the period TV variety show which serves as the framing device in McNally’s book (as per the song “In Living Color” used as a motif throughout).

That conceit does, however, create a distancing effect, inasmuch as there are moments when just as you get caught up in the story, you are pulled back to the artificiality of the concept.