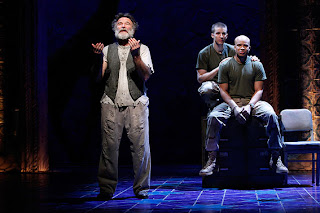 In 2003 Baghdad, a Tiger (Robin Williams) is fatally shot by marine guard Kev (Brad Fleischer) after Tommy (Glenn Davis), his partner in guarding the zoo after the Americans have bombed it, has his hand bitten off by the beast. The tiger’s ghost returns to roam the city, searching for spiritual answers, and haunting his killer.

The handless marine, shipped back to Iraq with a prosthetic appendage, returns to retrieve the gold toilet seat and gold gun he had purloined from Saddam Hussein’s effects during the invasion, and subsequently hidden. Musa (Arian Moayed), the U.S. military’s Turkish translator, is now in possession of the gun. But Musa has demons of his own.

Characters haunted by ghosts and guilt, while vainly seeking meaning, God and redemption permeate the unusually structured dream piece by Rajiv Joseph whose play was a finalist for the 2010 Pulitzer Prize for Drama. “Speak, God, speak,” demands the Tiger, echoing the feelings of nearly all the characters before the evening is over.

The play has an admirably implicit anti-war tone. The marines are often not likeable, though plainly out of their element in the foreign environment, and ultimately as conflicted about their actions as the tiger’s ghost who regrets mauling a couple of children years before.

The entire cast, apart from Williams, took part in the play’s two engagements at the Center Theatre Group in Los Angeles in 2009 and earlier this year, and they are all very fine. Brad Fleischer is the naïve, emotionally unstable marine; Davis is the tough one motivated by self-interest. Arian Moayed is the translator whose background – when it is finally revealed – is emblematic of the complex moral confusion of all the parties concerned.

Hrach Titizian plays two roles, including a malevolent ghost who haunts Musa, and suggests that the delineation of right and wrong is far from clear. Sheila Vand also does double-duty as disparate victims of the soldiers and the forces of Saddam respectively. Likewise, Necar Zadegan shows versatility in her two contrasting parts.

Williams, scruffy and bearded, admirably underplays his comic persona, though the tiger’s sardonic lines (at one point, he wryly describes himself as a “dead cat consigned to a burning city”) do elicit stronger laughter than perhaps intended. But the audience clearly wants to laugh at Williams, and it’s to his credit and that of director Moises Kaufman that once the gravity of the situations at hand is firmly established, they don’t.

Most of the other roles are larger than his, but Williams is an adept stage actor, with a commanding presence, and his work here still rates as an auspicious Broadway debut. And if his participation in such an important play – for so, I believe, the topical subject matter and the quality of Joseph’s script establish it to be -- help attract an audience, so much the better.

Technical credits are all impressive, starting with Derek McLane’s imaginative use of stage space, including a giant topiary that figures significantly in the second act. David Zinn’s apt costuming and David Lander’s atmospheric lighting coupled with the moody sound design by Acme Sound Partnes and Cricket S. Myers create a powerful ambiance.

The play occasionally loses focus, but on the whole, rates as first-rate theater. Certainly, under Kaufman’s taut direction, the pace never flags, even if several moments seem a tad overwrought. But there’s depth and poignancy here, and much to ponder when the curtain falls.