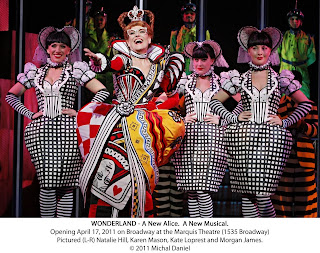 Much like the movie version of “The Wiz,” this latest riff on “Alice in Wonderland” puts an adult heroine in search of self at the center of a well-known children’s tale.(Remember Diana Ross as Dorothy anyone?) As with that cinematic “Wiz,” the results here are less than wonderful, and yet, also like that film, not totally egregious.

The problem with “Wonderland” is that the whole feels so very synthetic, derivative of better things (like, again, “The Wizard of Oz”), and dully predictable in its dime-store psychology (“Wonderland is you!” seems to be the message).

So, this adult Queens-based Alice (Janet Dacal from "In the Heights") -- separated from her out-of-work husband, and raising her sad daughter Chloe -- is looking for her inner self, the talent she abandoned as a child, a better appreciation of the things she already has, and female empowerment.

Jack Murphy wrote the book with director Gregory Boyd, and also supplied lyrics to Frank Wildhorn’s mixed-bag score, which runs a gamut of genres and proves highly variable in quality. In terms of the former, there’s Jose Llana as the Cheshire Cat (here El Gato) sings a Latin number; E. Clayton Cornelious as the Caterpiller has an R&B ditty, Darren Ritchie as the White Knight harmonizes with his back-up singers in the best boy-band style. All three of these numbers are actually pretty good.

Ritchie is, in fact, one of the show’s best performers, appearing also as Lewis Carroll in the second act, and a third role, which I shan’t spoil, though you’ll probably guess it. As Carroll, Ritchie delivers one of the better (and quieter) second act songs, “I Am My Own Invention.”

There are some good one-liners in the show, including some obvious punning on the phrase Tea Party.

One of the show’s dubious conceits is to have a female Mad Hatter. She’s played without much charisma by Kate Shindle like an Elphaba knock-off, but neither her songs nor her dialogue make for a very memorable villain, as she plots Alice’s demise, the Queen’s overthrow, and eventual rule of Wonderland herself. Her second act opener, “I Will Prevail,” is particularly strident and unpleasant. At one point, she pretends to be a marriage counselor and lures little Chloe down to Wonderland on the pretext of helping the girl’s parents.

Dacal makes a pleasant enough heroine, simple enough in manner not to disappoint youngsters in the audience who might not empathize with a grown-up protagonist. She does well with “Home,” the pretty (if again, derivative) duet with her young daughter Chloe (Carly Rose Sonenclar). But her big eleven o’clock number, “Finding Wonderland” doesn’t measure up to its climactic position in the show, or the decibel level accorded it.

Karen Mason channels some of her Norma Desmond experience into the Queen of Hearts, and gets two campy numbers “Hail the Queen” (with a homage of “Gypsy” and other musicals thrown in for laughs) and “Off with Their Heads” which she puts over with aplomb. Too bad the songs themselves aren’t just a bit more tuneful and witty. She also doubles as Chloe’s grandmother in the real scenes.

Edward Staudenmayer has some amusing moments as the (forgetful) White Rabbit, as does Danny Stiles as The March Hare.

Peter Hylenski’s sound design is often uncomfortably loud, and even so, the lyrics are often unintelligible.

Neil Patel’s set design and Susan Hilferty’s costumes are colorful, but lacking in true enchantment, though I liked the picturesque silver proscenium framing. Sven Ortel’s curtain projections before the show – traditional renderings of the Carroll characters – perhaps raise unfair expectations. Still, the high-tech Wonderland projections within the show are another plus.