The Motherf**ker with the Hat (Gerald Schoenfeld Theatre) 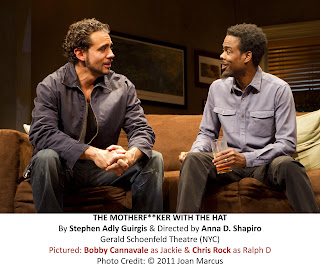 In case you were wondering, yes, there is indeed plenty of the sort of language implied by the provocative title. But if you’re not the sort to be offended by a heavy dose of expletives, you’ll find Stephen Adly Guirgis’ new play to be a superbly constructed, finely acted, genuinely funny, and ultimately, deeply touching experience. It certainly ranks with the best plays of the season.

Jackie (spectacularly embodied by Bobby Cannavale) is a parolee who’s recently served a two-year prison term upstate and has now returned to his combustible girlfriend Veronica (Elizabeth Rodriguez) with whom he’s been in love since eighth grade. Their passion is real, and they obviously care for each other, her addiction to crack notwithstanding. He’s full of boisterous high spirits, especially as he’s just landed a job, as well as randy and ready for sex. But Veronica says she wants to shower first.

While he’s waiting expectantly for her to emerge, his cheerful lustiness comes to a screeching halt when he spies a man’s hat on the table across the room. He sniffs the sheets like a hound dog with a scent. Someone else has been in the bed. In a trice, a dark and dangerous mood descends. He rails at Veronica for her perfidy with the downstairs neighbor always seen with a hat. She heatedly denies the charge, and gives back as good as she gets.

Unconvinced, he seeks solace and counsel from his friend and AA sponsor Ralph D. (Chris Rock in his Broadway debut). The calm and unflappable Ralph – his own addictions behind him, by contrast with Jackie and Veronica’s abode, lives in an orderly apartment (versatile scene-shifting sets by Todd Rosenthal) with wife Victoria (Annabella Sciorra), who’s almost as feisty as Veronica. Ralph has replaced his former addictions with yoga, health food, French lessons and surfing in Far Rockaway. Ralph talks Jackie down from his murderous thoughts about the neighbor, and insists they pray together.

But after not taking Ralph’s sage advice, Jackie turns to his New Agey cousin Julio (hilariously campy Yul Vazquez). That’s the setup, but I won’t reveal anything further as the delicious and frequent surprises are among the special pleasures of Guirgis’ masterful style. Suffice to say, what follows is beautifully constructed, with unexpected events that unfold with great ingenuity.

Cannavale’s blazing performance is among the most impressive this season. His part is sharply written, but he plays every nuance to the hilt, encompassing a wide range of emotions. I can’t imagine Brando in "A Streetcar Named Desire" making a stronger impact than Cannavale does here.

Rock also does fine work, though not on Cannavale’s exalted level, even allowing for his character being mild-mannered and more subtly shaded than Cannavale’s powder keg.

The women are also superb, and similarly contrasted. Rodriguez is a raging force of nature, but Sciorra shows her temperament in different ways, as we learn more about her less-than-ideal marriage.

Friendship, loyalty, fidelity, moral choices are among the themes in a play which, like Veronica, has a bountiful heart beneath its sordid and sometimes profane exterior. Guirgis’ rhythms and quirky dialogue are somewhat akin to those of Martin McDonagh’s best work. But his own voice is distinctive and the dialogue really crackles.