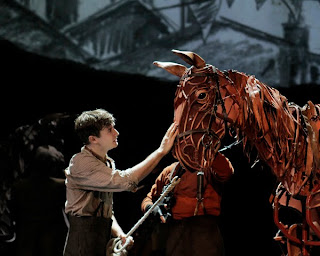 If “War Horse” isn’t, in fact, the greatest theatrical experience of my life (and I’m not at all sure it isn’t), it certainly ranks in the Top Five.

The National Theater of Great Britain’s glorious production – which I saw in late 2008 in London, tears running down my cheek in the front row (very embarrassing!) – has been transferred intact to the Vivian Beaumont, which is probably the only venue in the city that could accomodate the panoramic setting as it was on the similar –- if somewhat larger -- thrust stage of the Olivier.

Nick Stafford’s adaptation of Michael Mompurgo’s novel, as wondrously directed by Marianne Elliott and Tom Morris, is an utterly gripping World War I tale about Albert (Seith Numrach), a 16-year-old farm boy who runs away from home and, though underage, joins the army to find his beloved horse Joey after his father Ted (Boris McGiver) sells it to the cavalry.

Though the horses’ operators are plainly visible, the animals seem so real that you barely focus on the so-called puppeteers, so adept are they at recreating the horses’ natural moves. The transformation of Joey from a spindly foal to an imposing steed is nothing short of miraculous.

The title notwithstanding, “War Horse” has much more than battle scenes at the western front. The early parts where the easily goaded Ted, using the family’s precious mortgage money, outbids his more prosperous brother Arthur (T. Ryder Smith) for ownership of the horse at auction, and the farm scenes where Albert bonds with Joey, and then is forced by circumstances to train this part-thoroughbred hunter to do farm work, are just as compelling.

So, too, is the family dynamic between Albert’s mother Rose (Alyssa Bresnahan) and her weak, alcoholic husband, and the sibling rivalry between Ted and Arthur. How that relationship shifts once both of their boys are off at war is handled most movingly.

There are several quite thrilling moments, including the spectacular first act conclusion – a real coup de theatre – and later, a battle scene involving a tank, and another heart wrenching one involving a nasty run-in with barbed wire.

Amidst such magnificent staging, it’s easy to lose sight of the quality performances but Numrach, Bresnahan, McGiver, Smith, and Matt Doyle as Albert’s cousin Billy all offer finely drawn portrayals.

Among the military characters, Stephen Plunkett as the Lieutenant Nicholls who takes ownership of Joey when he is first posted to France, and Peter Hermann as Hauptman Friedrich Muller, a German officer whose love of his own horse Tophorn, parallels Albert’s for Joey, are outstanding. While Albert boasts of getting “bloody Fritz” (the Germans), little does he know that Muller is taking care of his beloved horse.

The play is as strong an anti-war play as been done, the pre-war jingoism sounding quite empty once in the midst of battle, its horrors vividly portrayed, and its senselessness underscored repeatedly. And the sympathetic portrayal of the German side, with Muller and others, echoes “All Quiet on the Western Front.”

“War Horse” is theater at its purest, a breathtaking theatrical experience you must not miss.