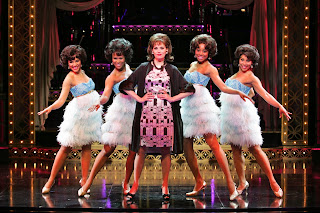 “Baby It’s You!” tells the story of Florence Greenberg (Beth Leavel), a music-loving Passaic, New Jersey housewife and mother of two, who founded and promoted the Shirelles. The four African-American high school girls would become the country’s number one female singing group. The narrative unfolds in a mostly enjoyable if unabashedly superficial way.

Floyd Mutrux and Colin Escott’s script (conceived by Mutrux) also charts the breakup of her marriage to her male chauvinist husband Bernie (Barry Pearl), and affair with African-American songwriter Luther (“Sixteen Candles”) Dixon (Allan Louis) who became her business partner in Flo’s record company Scepter which went on to release Burt Bacharach’s early output. Ultimately, her determination to bring that composer into the fold would cause a rift with Dixon.

The show comes across as a lightweight mash-up of “Jersey Boys,” “Memphis,” and any number jukebox musicals, but within its less ambitious structure, what it does, it does very well. Along with the Shirelles hits like “Soldier Boy,” “Will You Love Me Tomorrow,” and “Mama Said,” are numerous other pop songs of the period. showing the group appearing on bills with name performers, like Chuck Jackson (“Since I Don’t Have You”), Lesley Gore (“It’s My Party”), and Dionne Warwick (“Walk on By”). This serves to add variety to a generally satisfying musical program.

Plot-wise, the focus is squarely on Greenberg, with the Shirelles – Shirley (Christina Sajous), Beverly (Kyra Da Costa), Doris (Crystal Starr), and Micki (Erica Ash) -- providing mostly the onstage and in-studio vocals. We see Flo’s maternal concern for her girls, and eventually Shirley seems to be a rival for Dixon’s affections, adding a teasingly triangular aspect to the plot. Not much is made of that, however. Still, the general arc of the story is interesting enough.

Leavel gets her meatiest role yet as the savvy, determined entrepreneur, and she’s quite good, script sketchiness notwithstanding. Louis makes a solid Dixon.

The first act plays very well, charting as it does Flo’s improbable career switch and the ascendancy of the group. The second act, though packed with songs, has a more sour edge, dealing as it does with the group’s loss of popularity, and the breakup of Flo and Dixon. Of course, their adulterous affair has a somewhat disagreeable patina to begin with.

Bernie doesn’t seem like such a bad sort, despite some early sexist remarks that lead the audience to boo and hiss. After Flo insists that being a homemaker is as much a job as his own, Bernie retorts, “When you bring home a paycheck, you’ve got a job.”

But it’s clear he financed his wife’s early efforts. At one point, Flo says to her daughter Mary Jane (Kelli Barrett) from whom she’s estranged, “You know your father,” perhaps hinting at other character flaws, but we never get to hear them. Similarly, an implication of payola is glossed over. At the end of the day, though, I think Mutrux and Escott were wise not to delve too much into the nitty-gritty, but tell just enough of what really happened to support the songs.

Apart from Leavel, Louis, Sajous, and a couple of others, the cast members play multiple roles quite impressively. Geno Henderson as the show’s narrator Jocko essays three other parts; Brandon Uranowitz plays both Flo’s blind son Stanley and promoter Murray Schwartz, and Barrett (who has a terrific voice, incidentally) has a turn as Lesley Gore. The characters are fairly one-dimensional, but the story is told well enough, and it is compelling.

The songs are pleasingly performed, some of them sung in character beginning with a script cue and, and then opening up to a full-bodied number done by the girls or one of the other contemporary singers. The musical program overall is first rate, and uncommonly well integrated into the plot.

The show is nicely paced by Mutrux and Sheldon Epps who share directing credit, This is a relatively compact production, but it looks handsome enough, thanks to sets by Anna Louizos, costumes by Lizz Wolf, and lighting by Howell Binkley.

If you aren’t bothered by the lack of depth, you should have a good time.