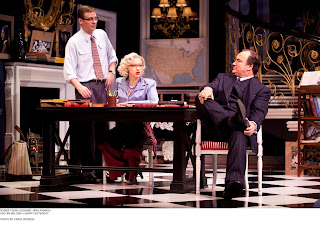 The story, set in Washington, D.C., centers on Billie Dawn, a stereotypical “dumb blonde” (Arianda) whose thuggish, junk magnate lover Harry Brock (Belushi) hires New Republic reporter Paul Verrall to give her some gentility. Inevitably, she falls in love with Verrall in the process. The George Cukor film version with its indelible original stage star Judy Holliday at her most adorable is, of course, a staple of Turner Classic Movies.

The sweetness and innate class of Holliday’s performance is somewhat lacking in the otherwise marvelous Arianda’s winning performance which, rather than because any lack of chemistry between Arianda and Leonard, serves to undercut the believability of romance between Billie and Verrall. Would this bookish, articulate crusader really fall for someone quite so common? Then again, there’s Henry Higgins and Eliza Doolittle, but I digress.

But even if disbelief must be suspended rather more than usual, the play delivers the requisite laughs. And the premise that a little education can lead to empowerment, a greater sense of civic responsibility, and ultimately defeat high-powered corruption in our nation’s capital, still resonates, however simplistic that last notion may be.

Bulushi gives a well shaded performance showing the vulnerability beneath the Tony Soprano-like exterior, so much so, in fact, that you genuinely feel sorry for him as Billie starts to gravitate towards Verrall. And this is even after we have witnessed Brock’s extreme physical brutality towards Billie when she first stands up to him.

Terry Beaver as the senator under Brock’s thumb, and Frank Wood as Brock’s once-upright lawyer, and Michael McGrath as one of Brock’s henchmen, give good support.

Interesting footnote: in a season in which “Anything Goes” has returned in such a triumphant revival, “Born Yesterday” is one of two straight plays currently on the boards that quotes one of the Cole Porter musical's songs.