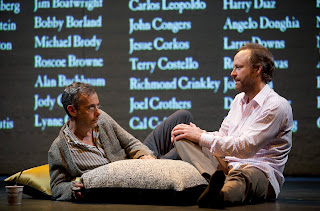 The excellent 2004 Public Theater revival (with Raul Esparza) of Larry Kramer’s masterwork about the early days of the AIDS epidemic – 1981-84, to be exact – was not that long ago. But this spellbinding revival with its superb cast more than justifies its mounting on Broadway a mere eight years later.

Jointly directed by the Joel Grey (who played Ned during the play’s original run) in tandem with George C. Wolfe, the action plays out on David Rockwell’s spare white box set, which allows projections of the time and place, and most strikingly and poignantly, the ever-growing lists of AIDS victims.

On this occasion, it’s Joe Mantello who plays the Larry Kramer role of Ned Weeks, a writer who becomes a strident activist fighting an unyielding bureaucracy, and he plays it brilliantly, not afraid to show Ned’s irritating side when he needs to do so, which is often. Of course, Kramer is the hero of his own drama, but he shows enough of the abrasive quality to offset the halo.

Though much has transpired since the events outlined here, the plague (as Kramer labels AIDS in a heartfelt letter handed out after the show) still has no cure, research for a cure is shockingly under-funded, and people are still dying. Even if that weren’t the case, the events of the play are as irresistibly gripping as in an Ibsen play.

Good as Mantello is, the rest of the cast is equally fine. John Benjamin Hickey plays Felix Turner, the New York Times Style-section writer, whom Ned approaches with the hope the paper will finally write about the epidemic, but in short order, they fall in love. Their happiness is short-lived when Felix discovers a lesion on his foot. Felix’s decline is spectacularly etched by Hickey right up to the final moving moments of the play, his voice now a hoarse whisper.

Ellen Barkin is the wheelchair-bound Dr. Emma Brookner, sardonic, no-nonsense, and compassionate, desperate to warn the gay community that their sexual liberation might be killing them. Her second act monologue as she rails against the board denying her needed research funds is one of the most searing scenes on the boards right now, truly goose-bump time.

Ned’s colleagues in the Gay Men’s Health Crisis (though it's never named) – Mickey Marcus (Patrick Breen), Bruce Niles (Lee Pace), Tommy Boatwright (Jim Parsons) among them – are all pitch-perfect, and Kramer has constructed the play so that each gets his own chance to shine. One by one, we observe the toll that the struggle is taking on each one of them.

Mark Harelik as Ned’s straight brother from whom he becomes estranged, and Richard Topol is the mayor’s assistant are spot-on in their roles, too.

The direction is taut, as in the tense scene of the group’s meeting at a windowless basement office at City Hall, but there are many moments when you can hear the proverbial pin drop.

Far more than a polemic, this is a blazingly vital drama that will, I think, stand the test of time. The audience responded at the end with a richly earned standing ovation. There have been many worthy dramas on Broadway this season, but the sense of urgency in this one is unmatchable.