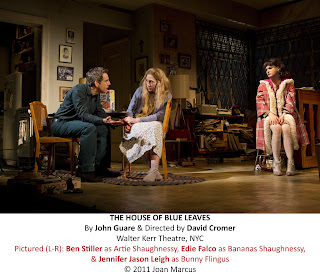 Curiously, John Guare’s absurdist comedy seems to have dated less well than many of the other plays revived this season, though that being said, there is plenty to enjoy here, and David Cromer’s production is very fine, if rather darker (literally, thanks to designer Brian Macdevitt’s low-keyed lighting, and figuratively) than the Vivian Beaumont revival of 1986.

Ben Stiller is Artie Shaughnessy, a zookeeper with little talent but big aspirations of becoming a Hollywood composer. His songs are downright terrible, as we observe as he tries to play and sing them to a loud, utterly indifferent audience at the bar where he plays on amateur night. (Stiller’s vocalizing is pretty good, however.)

Saddled with a schizophrenic wife, aptly named Bananas (Edie Falco), he plans to commit her to an institution and run off with his mistress, downstairs neighbor Bunny Flingis (Jennifer Jason Leigh).

His boyhood friend Billy (Thomas Sadoski), now a Hollywood bigwig, would seem to be his salvation, and Bunny urges him to call, and pave the way for a visit.

The aforementioned bar lounge excepting, the action takes place in Artie’s cluttered apartment in 1965 (set by Scott Pask), the day of Pope Paul VI’s visit, giving Guare plenty of opportunity for satiric jibes about religion and the nature of celebrity, both of which coalesce in the sudden appearance of three idolatrous nuns – Mary Beth Hurt, Susan Bennett and Halley Feifer – who are so enamored of the Pope that they come through Artie’s window begging to watch their beloved Pontiff on television.

It is, in fact, the appearance of these three sisters where the play’s more or less realistic tone takes a wildly surreal turn. Continuing in the same vein, Artie’s son Ronnie (amusing Christopher Abbott) has gone AWOL from the Army and is planning to make a name for himself by blowing up the Pope, unbeknownst to the other characters. (Stiller played Ronnie in the 1986 revival, and the part of Bunny was originated by his mother, actress Anne Meara.)

Stiller makes a good Artie, and demonstrates a natural stage presence. But it’s hard to feel sympathy for his character and his failed dreams, as his behavior to Bananas seems so callous. Falco is extraordinarily good and very touching as the sometimes surprisingly perceptive missus. And Leigh’s self-centered Bunny hits all the comic notes as she utters one vapidity after another.

Alison Pill – so fine in last year’s underrated production of “The Miracle Worker” – is marvelous as Billy’s glamorous blonde girlfriend who decides to pay a visit to the Shaughnessys with funny and ultimately tragic results. Sadoski makes his appearance late in the play, and is another plus.