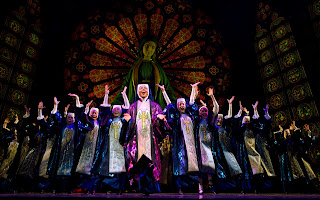 This thoroughly entertaining stage version of the 1992 Whoopi Goldberg movie about a singer who goes undercover in a convent after she witnesses her crooked married boyfriend commit murder – in the process, reinvigorating the choir, the church, and the community -- is the latest in a series of film-to-stage adaptations this season.

More so than “Women on the Verge of a Nervous Breakdown” or “Catch Me If You Can,” “Sister Act” most resembles “Priscilla, Queen of the Desert” both in its musical milieu, although this is a brand new score (by Alan Menken), and its drag sensibility. For here we have, after all, a bevy of nuns ultimately jazzing up their habits with sequins and glitz. Both shows are enjoyable, but I’d give “Sister Act” the edge for its overall cohesiveness.

Patina Miller, who sizzled in the sexy “Who Will Buy?” number in Encores’ “Lost in the Stars” earlier this year, gives a star-making performance in Whoopi Goldberg's movie role of Deloris Van Cartier. (Goldberg co-produced, and briefly assumed the role of the sternly disapproving Mother Superior in the original London production.)

A sort of Tina Turner with a heart of gold underneath the cocky exterior, Deloris takes the pathetically off-key sisters’ choir and gets them singing the Lord’s praises with Motown-fused ardor. The number that effects that transformation, “Raise Your Voice” is a real showstopper.

Victoria Clark is co-billed as the Mother Superior and gives her usual fine performance making the most of her second act musical soliloquy, “Haven’t Got a Prayer.”

The other principal nuns are excellent and distinctive, too: Marla Mindelle as the shy postulant Mary Robert who finally cuts loose with her eleven o’clock number “The Life I Never Led”; Sarah Bolt as the jolly Mary Patrick; and Audrie Neenan as the feisty Mary Lazurus. The reliable Fred Applegate is spot-on as Monsignor O’Hara who overrules Mother Superior’s worries about appropriateness of Deloris’ methods, particularly when attendance in the failing parish starts to climb, the collection baskets to fill, and no less than Pope Paul VI sends word he wants to see the sisters in action.

John Treacy Egan, Caesar Samayoa, and Edmond Green are a hoot as the henchmen of bad guy Curtis (Kingsley Leggs) who join him for the comically threatening “When I Find My Baby,” as Curtis declares what he’ll do to Deloris when he locates her, and in the second act vocalize, one by one, their absurdly romantic notions of how they’ll apprehend Deloris by sweet-talking the nuns (“Lady in the Long Black Dress”).

Chester Gregory as Eddie, the cop assigned to protect Deloris, and who’s loved her since high school, shines in his brightest number when he imagines the kind of cool dude he might be if he overcame his shyness (“I Could Be That Guy”).

Menken’s score (clever lyrics by Glenn Slater) has the appropriate soul-infused sound, but includes more reflective numbers where required. And the well-constructed book by Cheri Steinkellner and Bill Steinkellner (adapted from Joseph Howard’s screenplay) has lots of laughs, no doubt many of them the work of Douglas Carter Beane who supplied “additional book material."

Jerry Zaks is an old hand at this kind of funny business, so the comedy is given full measure, while the narrative clips along at a tight pace. Anthony Van Laast provides the sister’s roof-raising choreography.

Klara Zieglerova has designed an imposing church setting for most of the action, with Natasha Katz supplying appropriately subdued lighting for the intimate scenes and ramping it up for the flashy production numbers.

The audience responded with rousing enthusiasm throughout, affirming the show’s sure-to-be hit credentials.