The Best is Yet to Come: The Music of Cy Coleman (59E59 Theaters) 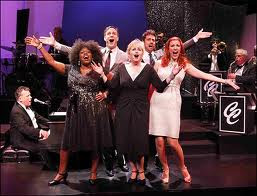 This tightly constructed, fast-moving tribute to the eclectic songwriter packs a heap of entertainment value into its intermission-less 85 minutes.

With a personable cast comprised of some of our best performers, most of them veterans by this point, the evening – from California's Rubicon Theatre Company -- was devised and directed by David Zippel who provided the lyrics for the composer’s 1989 hit “City of Angels." He shows his cast to best advantage in a seamless succession of solos, duets, and ensemble numbers.

There’s the versatile Rachel York playing it sexy and sultry; Sally Mayes, vulnerable and playful; Howard McGillin, suave and smooth; Lillias White, funny and scorching; and at the piano, Billy Stritch. the show’s urbane musical director, whose impeccable musicianship keeps the whole enterprise, including a seven-piece Big Band at a high level. (York once played Lucille Ball in a made-for-TV movie, so it’s fun to see her essay Ball’s “Hey, Look Me Over” from “Wildcat,” though the interpretation here couldn’t be more different from Lucy's.)

Vocally, everyone’s in fabulous shape. David Burnham, the one cast member who hasn’t yet achieved the lifetime credentials of his co-stars, looks well on his way, and holds his own effortlessly with the others, including his homage to Sinatra as he croons “Witchcraft.”

That’s just one of many hit numbers from Coleman’s trunk, which includes favorites from such shows as “Little Me,” “Sweet Charity,” “The Will Rogers Follies,” “Seesaw,” and “On the Twentieth Century,” all of which are represented here. But there's also lesser-known material, including several numbers from “N*” a show about Napoleon that he and Zippel were working on which was never produced. (McGillin’s big number “I’ll Give the World” hails from that score.)

The cast groupings are often witty (“Don’t Ask a Lady” is but one example), as Zippel constructs mini-story arcs for the song clusters, ultimately building to a nightclub setting where the cast alternates as performer and audience. Mayes delivers a striking “With Every Breath I Take” in this sequence.

By a long shot, the front-running showstopper of the evening was White’s sensational reprise about being too old for “The Oldest Profession” from the musical “The Life.” The role won her a Tony, and if anything, her interpretation has only deepened with the years.

Lorin Lattaro has provided some very cute choreography, as for example in “Those Hands.”

For such an intimate space, the sound design of Jonathan Burke and the generous musical accompaniment is sometimes, I must confess, a bit overpowering, and the face mikes worn by the cast slightly mar the visual impact.

But these minor caveats aside, there’s no more tuneful playlist in any musical on the boards right now.