The People in the Picture (Roundabout Theatre Company) 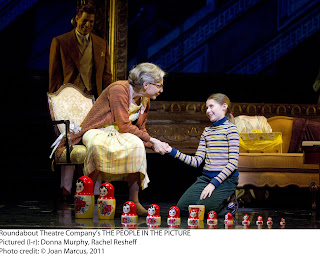 “The People in the Picture” is the sort of show that makes you wonder how so many extremely talented people could come up with such a ho-hum result.

Donna Murphy plays Bubbie, an old Jewish grandmother living with her resentful, single-mom daughter Red (Nicole Parker) and grandchild Jenny (Rachel Resheff) in 1977 New York. Jenny, if not Red, adores Bubbie who, we learn, was once the star of a Yiddish theatrical troupe in Warsaw in the 1930’s, when her name was Raisel. Jenny can’t get enough of her grandma’s colorful past, and is eager to soak up the language, culture and culinary delights of the old country.

"Beaches"-author Iris Rainer Dart’s script moves back and forth in time, as Raisel’s history unfolds. Bubbie’s lover goes off to America, leaving her pregnant. As anti-Semitism escalates, the members of the troupe are increasingly harassed, Bubbie is compelled to take drastic action to protect her child. And we eventually learn what precisely Red has against her mother.

The music – the songs credited to either Mike Stoller (of Leiber & Stoller) or Artie Butler respectively – is unobjectionable, but on first hearing, not terribly distinguished, and reminiscent of other, better, Jewish-themed musicals. Ms. Dart’s lyrics are dully predictably. You can hear the rhymes coming a mile away.

Murphy gives a truly superb dramatic performance, effortlessly transforming from the increasingly forgetful old lady to the vibrant young performer. But the property is so unremarkable, it’s difficult to enthuse about her considerable accomplishment. I would much rather see her in, say, “Rags.” Her colleagues in the troupe are all fine performers – Alexander Gemignani, Joyce Van Patten, Chip Zien, Lewis J. Stadlen, Christopher Innvar – so no complaints there either.

Riccardo Hernandez’s setting – a giant picture frame and other smaller frames – is obvious but striking, at least for a while. Ann Hould-Ward’s costumes seem accurate enough for the period, and allow Murphy to change eras smoothly.

Michael Starobin’s accomplished orchestrations, conducted with customary flair by Paul Gemignani, are as polished as the rest of the production.

There’s not much choreography to speak of, but Andy Blankenbuehler is credited with musical staging. Leonard Foglia directs competently, but the whole enterprise is so by-the-numbers, with one clichéd moment following another, that it seems all for naught.

Though the press material for the show speaks of it being "funny," the attempts at humor are actually fairly lame, and with its heavy Holocaust theme, I'd say “Mildred Pierce” meets “The Dybbuk” is more like it. But Murphy is remarkable.