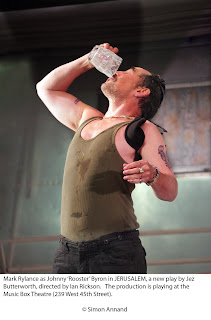 For the second time this season, the superb Mark Rylance gives an absolutely extraordinary performance, and one which couldn’t be more different from the stream-of-consciousness chatterbox he played in the Moliere send-up, “La Bete.”

On this occasion, he’s societal renegade Johnny “Rooster” Byron, living in a ramshackle trailer home in a Wiltshire forest of present-day England. It’s St. George’s Day, and the provincial Flintock Fair is in full swing.

There’s also a dotty professor (Alan David) and a sad-sack bartender (Max Baker) who has banned Johnny from his pub, after the latter recently went on a naked bender (the incident repeatedly and amusingly referred to as a “fracas”). Of course, Johnny has no memory of this, nor of the wild revels the night before when, among other things, he smashed his flat-screen TV.

The local authorities are poised to evict him, but you’d almost never know it from Johnny’s nonchalance.

But as the story progresses, and Johnny is visited by his six-year-old son Marky (Aiden Eyrick at my performance), in tandem with the boy’s mother Dawn (Geraldine Hughes), playwright Jez Butterworth peels back the bravado from the former daredevil cyclist (20 years earlie), and we see – thanks to Rylance’s monumental performance -- the humanity beneath. His absolutely mesmerizing recounting of a tall tale about a long-ago encounter with a giant is but one example of Rylance's formidable technical skill. He’s funny in his often deadpan delivery, but also poignant in his self-awareness.

It’s a long play, with only a pause between the second and third acts, but it holds your interest, despite the occasional talky patch. Though some of the cultural references may be obscure to an American audience, the overarching theme of England’s eroding rural life, its ironic title taken from the Hubert Parry/William Blake anthem (sung in the play by Phaedra, dressed in her fairy costume for the fair), is easy enough to follow. And Butterworth’s dialogue is wonderfully quirky.

Under director Ian Rickson, all of the performances – both the original Royal Court cast from London, and the few American replacements – are terrific, their characters richly drawn.

Both the play and Rylance’s performance make this a must-see experience.