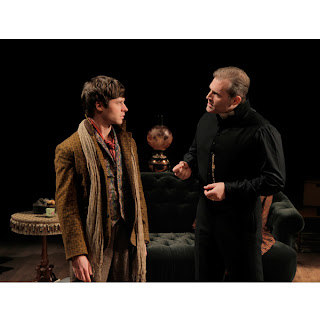 The enormous success of “My Fair Lady” (“Pygmalion”) and “The Chocolate Soldier” (“Arms and the Man”) notwithstanding, most of George Bernard Shaw’s works -- including his 1897 “Candida” from which the dully titled “A Minister’s Wife” derives -- would seem highly unlikely candidates for musical treatment, despite "Candida" containing rather more romantic elements than some others of his plays.

But Michael Halberstam – who both conceived and directed this production – apparently thought otherwise. With a score by Joshua Schmidt, whose adaptation of Elmer Rice’s “The Adding Machine,” was so compelling, and lyrics by Jan Levy Tranen, and a reduction of Shaw’s original by Austin Pendleton, the result is well-intentioned but tedious, even at 95 minutes.

This is not to say the leading players aren’t commendable. Marc Kudisch is The Reverend Morell, a Christian Socialist, high in demand on the lecture circuit. Kate Fry is his lovely, empathetic wife Candida, just returned from holiday with an idealistic young poet Eugene Marchbanks (played by Bobby Steggert) in tow.

In short order, Marchbanks, who is totally smitten with Candida, declares his love for her, and his belief that she is wasting her life with the commonplace Morell who bores his wife with what Marchbanks defines as merely “the gift of the gab.” Though Morell is tempted to throw the lad out, he begins to think perhaps the young man’s accusation might carry some truth, and he allows him to stay, ultimately forcing Candida to choose which she prefers.

Drew Gehling is Morell’s curate Lexy, and Liz Baltes his adoring secretary. Pendleton has dispensed altogether with the colorful and humorous character of Candida’s low-born father who, in the play, engages with Morell in a Higgins-Doolittle sort of dynamic.

Kudisch, Steggert, and Fry are fine, if not perhaps in the ranks of Katharine Cornell, Raymond Massey and Marlon Brando, or the other legendary interpreters of these parts, who, of course, didn’t have to contend with Schmidt’s rangy, declamatory score. (Deborah Kerr was my first Candida in London, opposite Denis Quilley, and though technically too mature for the part, she was truly luminous.)

Though it’s unfair to judge a score on first hearing, the songs – such as they are – seem utterly extraneous, an intrusion on Shaw’s brilliant original. They’re accompanied by an orchestra of four players, giving the enterprise the feel of a chamber musical.

Shaw’s play – a comic and wry paean to marriage and a “counterblast” (to quote Shaw) to Ibsen’s “A Doll’s House” (for here, it is the husband who is essentially the “doll”), -- was always one of his most popular. But you’d never know it from this dreary retread.