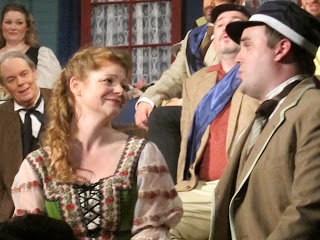 It’s curious why it should be so, but Sigmund Romberg’s “The Student Prince,” the third and final offering of Light Opera of New York’s season – theoretically, the simplest to stage after the far more elaborate demands of “Desert Song” and “The Vagabond King” – proved more problematic to pull off.

Paradoxically, it may be because Dorothy Donnelly’s book – about a 19th century prince who falls in love with a Heidelberg barmaid before being called back to his duty - is so good, based as it is on a popular play of its day, that the acting really needs to be grippingly compelling, while the endless reprises of the big tunes and extensive use of underscoring demand a full orchestra for maximum effectiveness.

Daniel Greenwood and Elizabeth Hillebrand proved likable performers with quality voices. His phrasing had elegance and style, though like so many of the cast, he wasn’t always successful in cutting through the tubby acoustics of the Landmark on the Park church. Hillebrand’s notes sailed out in the high lying passages, but at some loss of vocal purity. Their acting was better than adequate, though he could have used more dash, she more charm.

Scott Michael Morales did an OK job with the comic shenanigans of Lutz, the prince’s stuck-up valet, and ditto Jeff Horst as his sidekick Hubert, but their dated comic business quickly grew tiresome.

Musical director Steve Vasta’s reduction of the orchestrations was tasteful as always, and the result seemed more of a chamber piece than his more vigorous previous efforts. There were some cuts in the score, but it was nice to hear many of the bits and pieces of the score less frequently recorded.

Intimate though the story is, “The Student Prince” calls for a robust male chorus. Even though “Vagabond King” and “Desert Song” contain far more muscular singing, LOONY somehow overcame the limitations of its small casts in those productions, but the crew here sounded pretty anemic, starting with their clomping onstage for their entrance, or pounding their beer steins on the table during “Drink, Drink, Drink.” The famous “Serenade” was executed with some sensitivity, but was not the knockout it should be.

Angela Christine Smith made an imposing Grand Duchess, mother of the prince’s betrothed, Margaret (Jennifer Dorre). The acting demands on the latter are minimal, but she sang the second act duet “Just We Two” nicely with Christian Smythe as her admirer Captain Tarnitz.

Matthew Kreger as Detlef, the principal student and head of the Saxon Corps into which Karl Franz is happily recruited, sang his several bits with firm tone and appropriate robustness. David Macaluso and Matthew Hughes also scored as students who have important parts in Romberg’s intricate ensembles.

By far the most consistently fine performance was given by Richard Holmes, as Karl Franz’s loving old tutor Dr. Engel who wants his charge to experience a normal life before returning to his royal responsibilities. Smoothly and sensitively vocalized throughout (so much better than the wooly baritones who usually play the part), he gave a dramatic performance to match, and had the requisite feel for the music, drama, and style of the piece. (And there were no audibility issues when he sang or spoke.)

On this occasion, resident book adapter Alyce Mott seems to have employed a light hand, given the superior source material, though she might have chopped a bit more in this instance! The book-heavy second act, with its long stretches of dialogue and paucity of new songs, was especially deadly.

Lydia Gladstone’s costumes added pleasing visual interest as usual. But the green curtains that masked the altar area became monotonous over such a long evening.

Resourceful director Gary Slavin did his best with the limited resources at hand.

Though, of course, there was no amplification when “The Student Prince” was first performed in 1924, miking would have helped this performance immeasurably. The dialogue would have been far more involving, and the balance between the singers and orchestra rectified. If LOONY ventures into less familiar territory in coming seasons -- and the attractive “operetta guide” insert in the program suggested this might be so – full audibility will be essential.

For all its faults, the audience – old-timers, operetta lovers, and showbiz pros alike – seemed to enjoy the tunes and the sentimental story.

The evening didn’t end with a standing ovation, but it began with one as board president Norm Keller paid touching tribute to co-founder Jack Behonek who died suddenly in April following surgery.