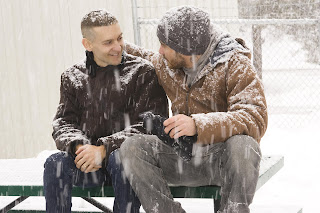 The release of this film couldn’t be more serendipitous, coming as it does so soon after President Obama’s speech about troop escalation in Afghanistan. Though “Brothers” avoids any overt political stance, it certainly will generate reflection about the effects of this war on the 30,000 troops about to be deployed.

This release is, in fact, a remake of the 2004 Danish film “Brodre” by director/co-writer Susanne Bier. Tobey Maguire and Jake Gyllenhaal are in peak form as, respectively, Sam Cahill, a dedicated marine deployed to Afghanistan in 2007, and Tommy, the wastrel brother who’s just finished a prison sentence for bank robbery back home, along with the marine’s wife Grace (Natalie Portman) and their two young daughters (Bailee Madison and Taylor Geare).

In Afghanistan, Sam’s helicopter crashes and he and a private (Patrick Flueger) are taken prisoner by the Taliban and tortured. Stateside, Sam is presumed dead, and as Grace and the girls try to continue life after the funeral, Tommy rises to the occasion, renovating Grace’s kitchen and helping her with the girls. Inevitably, there are romantic stirrings with Grace.

Sam is eventually rescued, and the family rejoices at the news. But he returns a shell of his former self, suffering from post-traumatic stress syndrome. Delusional and paranoid, he suspects his wife has slept with his brother.

Maguire and Gyllenhaal have never been finer: Maguire, after his return, looks convincingly gaunt and haunted, and Gyllenhaal skillfully shows shiftless dissolution morphing into genuine dependability. And quite remarkably, they really look like brothers.

Portman is fine as always though her role is rather conventional. Sam Shepard nails his not very likable character of Hank, Sam and Tommy’s rigid Vietnam vet father who has no problem telling Tommy he’s not fit to fill Sam’s shoes, but develops a grudging respect as Tommy’s character undergoes reformation. And young Madison and Geare are pitch perfect, and very much part of the adult ensemble.

The film flits between some fairly harrowing scenes in Afghanistan and the suburban Cahill home, but the emphasis is on the domestic situation of the latter, and the growing bond between Tommy and Grace.

Jim Sheridan directs with sensitivity and restraint, and there’s not a moment that isn’t absorbing. David Benioff’s script spells out some of what I gather was just suggested in the original, but this is a still a perceptive psychological study of polar opposites whose personalities are transformed by circumstance, as well as a portrait of the effects of war on the home front. In the latter respect, it resembles films like “Coming Home” and “The Deer Hunter” from an earlier era.

(Rated R by the MPAA for language and some disturbing violent content) Print this post
Posted by Harry Forbes at 4:59 AM