A View from the Bridge (Cort Theatre) 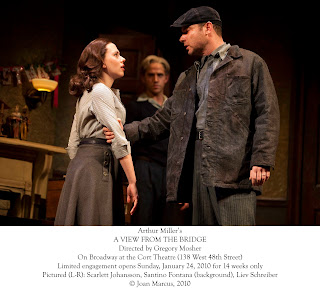 Eddie’s protectiveness of the guilelessly affectionate girl has morphed into an unnatural attachment, and he objects when she proudly announces she’s been chosen out of all the students in her secretarial school to start an actual office job.

Matters are further complicated when Beatrice’s Italian cousins Marco (Corey Stall) and blond Rodolpho (Morgan Spector) arrive illegally to stay with them, and Catherine and Rodolpho fall in love.

Eddie becomes predictably jealous of the attachment and convinces himself that “something ain’t right” about Rodolpho, implying that the young man is simply desperate for citizenship, and that his amiable manner and sweet tenor voice are signs of homosexuality. He confides all this to the lawyer Alfieri (Michael Cristofer), who also serves as the play’s narrator, a one-man Greek chorus, who urges Eddie to dispel those suspicions.

The stage is set for tragedy.

Miller’s text and the performances so strong, that the production is never less than compelling, but Gregory Mosher’s direction seems curiously muted. I recall the Tony-winning 1997 revival with Anthony LaPaglia, Allison Janney and the late Brittany Murphy -- as more satisfying overall.

To this production’s credit, Schreiber and Johansson’s entrances are so understated that the audience barely identifies them as the stars of the evening, and unusual for even the most serious plays on Broadway, the mood isn’t spoiled by applause.

Cristofer’s portentous narration is, at least, intelligently delivered, but I can’t help feeling that some musical underscoring during his monologues might strengthen Miller’s tedious conceit, while still avoiding anything that smacks of melodrama as Mosher seems determined to do.

Schreiber is totally immersed in his working class manner, heavy Brooklyn accent and all, even if he lacks the Italianate quality that past interpreters – Anthony LePaglia, Tony LoBianco, Raf Vallone in Sidney Lumet’s movie version (and where, incidentally is that excellent film?) – brought to the role. (On the other hand, we should remember the original Eddie was Van Heflin.)

Though Eddie can easily seem the villain of the piece, and his demand for “respect” in his own home rather ludicrous, given events as they unfold, Schreiber strives mightily to limn a well-intentioned man in the throes of a jealous passion beyond his control.

Johansson proves completely comfortable on stage, and fits in unobtrusively as a part of the ensemble, while affecting a convincing Brooklyn accent too.

Hecht – so touching in the late, lamented “Brighton Beach Memoirs” revival – etches another memorable portrayal here of a neglected wife, loving her niece, but understanding that her inattentive husband is in the throes of an unhealthy obsession.

Spector – who replaced Santino Fontana (like Hecht, so outstanding in “Brighton Beach Memoirs”) when the latter suffered a concussion during previews – performs capably, while Stall – the welfare of whose character's family back in Sicily depends mightily on his earnings on the docks – has several powerful moments when that livelihood is imperiled.

Though I would have preferred a somewhat flashier approach overall, this is, without question, a powerful revival of one of Miller’s most grippingly entertaining plays.