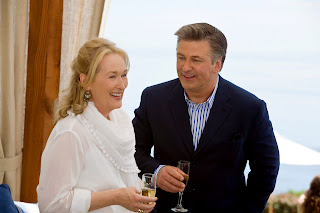 With each new film, Meryl Streep continues to astonish with her versatility and ability to invest her characters with insight and truth.

In writer-director Nancy Meyers’ new film, she plays a long divorced Santa Barbara restaurateur Jane who takes up with her estranged and since remarried ex Jake (Alec Baldwin) at their son’s (Hunter Parrish) graduation. She knows it’s wrong, for all the obvious reasons, but finds herself enjoying the affair, especially as the fling is so completely out of character.

But at the same time, she meets Adam (Steve Martin), a reserved and sensitive architect who’s been assigned to the ongoing renovation of her home. He’s a recent divorcee, reluctant to enter a new relationship, but attracted to Jane despite his qualms.

Streep’s son and two daughters (Caitlin Fitzgerald and Zoe Kazan) are oblivious to the rekindling of their parents’ romance, though the eldest girl’s fiance Harley (John Krasinksi) catches on. Rather like the twins in “The Parent Trap” (the remake, incidentally, penned by Meyers), Jane's children seem to yearn for a reconciliation, and take encouragement from the cordiality they observe at the graduation events.

Meyers’ script gives Streep and Baldwin some juicy comic bits, and they play them to the hilt. They kid their age – and in Baldwin’s case, his paunch -- without vanity, though it should be noted that Streep looks pretty darned good throughout.

Underneath the film’s gloss and comic elements, the script is savvy about relationships. The delicate dynamic between Jane, Jake and Adam is grounded in emotional reality. Jane’s dilemma is plausible, and Meyers maintains the requisite suspense throughout.

Whether boldly shedding her clothes (no actual nudity) in front of her former husband, or – for the first time in decades -- getting high on a joint with Adam, she proves, as she’s done not nearly enough in the past, a brilliantly deft comedienne.

With his resurgence in popularity thanks to “30 Rock,” Baldwin takes on his meatiest movie role in ages, and balances the blunt and sympathetic aspects of his part. He’s aided in the latter, in part, by Meyers ensuring the wife (Lake Bell) and particularly, the bratty stepson are less than lovable.

Martin has less screen time, and this is one of his most low-keyed performances, but his easy-going likability is right on target, and keeps the audience -- as much as Jane -- wondering which of the two guys would make the better match.

(Rated R by the MPAA for some drug content and sexuality.) Print this post
Posted by Harry Forbes at 12:51 PM