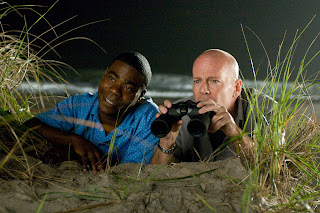 There’s the kernel of an amusing premise here: longtime NYPD partners tracking down a valuable baseball card going up against Mexican drug dealers. And Bruce Willis and Tracy Morgan must have seemed a good team on paper
.
But “Cop Out” is unrelentingly vulgar (a yucky scatological discourse gets my vote as the low point), Morgan’s character annoyingly foul-mouthed, stupid and self-absorbed (even as we’re meant to view him as basically a good guy), and there’s far too much heavy-duty violence for a presumed comedy.

On the ninth year anniversary of working together, Jimmy Monroe (Willis) and Paul Hodges (Morgan) have been suspended for a month without pay for botching up yet another assignment. Jimmy needs the money to pay for his daughter’s (Michelle Trachtenberg) wedding, so his ex-wife’s (Francine Swift) smarmy husband (Jason Lee) won’t have to do it.

Jimmy decides to sell his extremely rare 1952 Andy Pafko card (he’s heard it can fetch up as much as $83,000), but the dealer is held up, and the thieves (stoner Dave, played by Seann David Williams, one of two masked men) abscond with the card.

It ends up in the baseball collection of vicious baseball-loving drug kingpin Poh Boy (Guillerno Diaz) whose Mercedes (and its valuable though mysterious contents) goes missing. He eventually makes a deal with the Jimmy and Paul: he’ll return the card, if they find his car.

Kevin Smith inauspiciously directs the first film he didn’t write. Robb Cullen and Mark Cullen have the dubious honor of concocting this dubious homage to the buddy cop films of the 1980s.

Morgan’s shtick is that he parrots dialogue from classic movies, and frets that his wife (Rashida Jones) is cheating on him with the next door neighbor. Willis pretty much plays it straight as a long suffering but tolerant guy who just wants to be a good dad to his loving daughter.

Scott has some mildly amusing moments with his stream-of-consciousness back seat ramblings, as first he’s taken into custody, and then they co-opt him to help retrieve th4e precious card.

Kevin Pollak and Adam Brody are OK as detectives Hunsaker and Mangold, trying to play it straight and lord their by-the-books methods over disgraced Jimmy and Paul, but by the end, get a lesson in humility. Pollak proves a far better movie star impersonator than Morgan in one pearly moment when he mimics Robert DeNiro.

The attractive Ana de la Reguera makes a generally sympathetic Mexican kidnap victim, but did anyone really think it was funny to have her character spewing non-stop (subtitled) expletives? On the other hand, Susie Essman, as a woman whose house is burgled, reprises her foul-mouthed “Curb Your Enthusiasm” routine with amusing results.

A handful of funny bits like that, and the always watchable presence of Bruce Willis, who manages to keep his dignity throughout, are the minor attractions of this otherwise dismal flick.

(Rated R by the MPAA for pervasive language including sexual references, violence and brief sexuality.) Print this post
Posted by Harry Forbes at 6:30 AM