Mickey Rooney: The Long & Short of it (Infinity Entertainment Group) 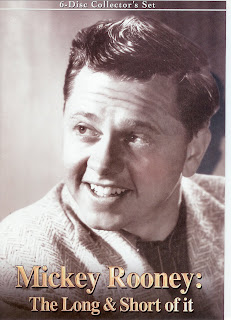 Despite his diminutive height (5’ 3”), make no mistake: Mickey Rooney was a major Hollywood star with over 200 films to his credit. From 1939-1941, he was actually number one at the box office. And he’s still performing today. So he is certainly deserving of a comprehensive boxed set. Unfortunately, this isn’t it.

Most of the memorable films he’s known for from his MGM period (including the series of musicals with Judy Garland) have been released by Warner Home Video.

What we have here is a rather peculiar amalgam of some disparate titles, all in public domain. The packaging and the attendant press material don’t even tell us what’s in this six-DVD box, and little wonder: the titles would mean absolutely nothing to most people.

And yet given the purview of most of the source material, print quality is not too bad on some of them. And for Rooney enthusiasts, the set may be worthwhile acquisition, as these titles may not turn up elsewhere. And Rooney is such a pro that even in these lesser effort, his natural quality shines through, and this set certainly charts his progression from precocious tyke to incredibly talented youngster and teenager, and finally, solid character actor.

Other titles in the set include “Officer Thirteen" (1932); "The Big Chance" (1933); "The Lost Jungle" (1934); and "Little Pal (The Healer)" (1935). He only had minor roles in most of these. There are three of his early shorts from his Mickey Maguire period, and some other short film and television sequences, including one episode from his series “Hey, Mulligan,” and a priceless encounter with Jayne Mansfield on an awards show.

(The Long & Short of it, Infinity Entertainment Group, Suggested Retail Price: $39.98) Print this post
Posted by Harry Forbes at 8:03 AM