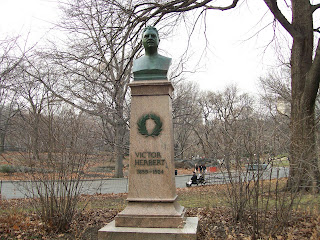 Given composer Victor Herbert’s unaccountably shameful neglect, it was heartening to hear a packed audience at Alice Tully Hall on Monday night singing along lustily to such chestnuts as “Sweethearts,” “In Old New York,” and “Ah, Sweet Mystery of Life.”

The occasion was the 150th birthday of the Irish-born Herbert, an event that kicked off with a proclamation from the Mayor's Office of Film, Theatre & Broadcasting officially declaring Victor Herbert Day.

The concert that followed was a glorious overview of an extraordinarily prolific and versatile composer, whose output encompassed classical orchestral works, opera, and a staggering number of operettas and musicals.

Dino Anagnost, music director of the The Little Orchestra Society, has been a faithful champion of Herbert’s music. In addition to regular seasonal performances of Herbert’s “Babes in Toyland” for children, he has resurrected some of Herbert’s most popular operetta titles every couple of years in semi-staged concert form at Alice Tully Hall, including at least one rarity, “Cyrano,” an unauthorized adaptation of “Cyrano de Bergerac.”

The other rarities were numbers from “The Wizard of the Nile” and “The Idol’s Eye” respectively, sung drolly by Downs. Otherwise, the program was, more or less, Victor Herbert’s Greatest Hits with evergreens like “Thine Alone” and “The Italian Street Song.”

Otherwise, the program used Herbert’s own glorious arrangements. Unlike most Broadway composers, then and now, Herbert wrote his own. His expertise in that area was further demonstrated by the inclusion of several rich orchestral pieces, including his “Festival March” “Cuban Serenade,” “Royal Sec,” and “Violoncello Concerto No. 2 in E minor.”

Only two movements of the last named were done, but they gave the flavor of the piece, with Matt Haimovitz providing the spectacular cello playing. Indeed, most of the numbers were performed in slightly truncated form, which was arguably forgivable, on this occasion, given the large number of selections.

Eric Downs and Joshua Jeremiah vied for baritone honors, the latter especially impressive in two numbers from “Mlle. Modiste.” John Pickle lent his pleasing tenor to “I’m Falling in Love with Someone,” and joined the others for “In Old New York.” (Was it necessary to substitute “girls” for “queens” in the familiar lyric “the queens you’ll meet on any street in old New York”?)

Abigail Nims was a standout with “’Neath the Southern Moon,” and Herbert’s most famous “Kiss” songs, “A Kiss in the Dark” and “Kiss Me Again.” Uecker got a big ovation for “To the Land of My Own Romance” while Kogan delivered spirited versions of her two big character numbers.

The vocal high point, though, was a magnificent “Live for Today” from “Naughty Marietta,” sung by all the soloists and the evening’s sturdy chorale group, the Metropolitan Singers/The Greek Choral Society.

When the orchestral sound was at its most effulgent, lyrics were sometimes covered, and some moderate miking would have been welcome, but that’s a small carp.

There is, of course, so much more to Herbert than the once-famous titles on display here. The late conductor John McGlinn’s sadly aborted project of urtext recordings (and performing editions) of Herbert & Jerome Kern’s scores would perhaps have brought these marvelous pieces back to the limelight in a major way.

As it is, this celebratory concert -- coming as it did amidst the Light Opera of New York’s Victor Herbert season at the Players – gave hope that the works of our greatest operetta composer may yet endure.